Four days after the passage of a contentious bill included in the late state budget raising the age of adult criminal responsibility to 18, defense attorneys, lawmakers, and state officials are still struggling to make sense of how exactly it will work.

Currently, 16- and 17-year-olds are automatically charged as adults in New York, making it one of two states in the country with such harsh standards. The reform as envisioned by Democrats and activists would have kept kids out of adult courts and jails across the board, keeping them strictly in family court and juvenile facilities. Republicans pushed back, though, and the resulting negotiations stalled talks for nine days beyond the budget deadline.

Under the new system, which is supposed to go into effect in October 2018, only misdemeanor charges will automatically go to family court. Nonviolent felony charges are supposed to be handled in a new "youth part" of criminal court, with the presumption that they'll later be referred to family court unless a prosecutor can prove "extraordinary circumstances." Violent felonies are supposed to go to the youth part and be subjected to tests to determine whether to remove them to family court, with the criteria being whether a weapon was used, whether the victim had "significant" injuries, and whether the crime was a sex crime.

A criminal justice reform advocate told Gothamist that there is a whole constellation of unknowns about how the new system will work day-to-day. Court staff, including youth and family court judges, juvenile public defenders, prosecutors, and probation officers need to be hired and trained for both the new youth section of criminal court and the vastly expanded family court system. New courtrooms need to be built to accommodate the new system, processing huge numbers of teens each year—in 2016, there were 24,500 arrests of 16- and 17-year-olds, according to the Governor's Office. And existing police and correction officers will need to be retrained about how to deal with teen defendants.

The youth-court judges are supposed to be trained in family law, and the courts are supposed to provide access to social services absent from normal adult court. But some 16- and 17-year-old felony defendants would still be tried as adults under the penal code, facing longer sentences, and if convicted, coming out of jail or prison with criminal records, unlike their peers in family court.

The biggest question, according to the advocate, is where these new classes of juvenile offenders will be jailed. State officials are currently in talks about regulations to match the needs created by the legislation. The current understanding, confirmed by the Governor's Office, is that 16- and 17-year-olds in criminal court will not be held in juvenile detention facilities, but rather in segregated custody within adult facilities, controlled by the state Department of Corrections, but with services rendered by the state Office of Children and Family Services. Still, no one can say for sure where these will be.

The reform specifically requires New York City to move 16- and 17-year-olds off of Rikers Island by 2018, ahead of Mayor de Blasio's timeline, setting the stage for yet another conflict between de Blasio and Governor Cuomo, and creating pressure for the city to build or renovate jails way more quickly than called for in the mayor's 10-year phase-out of Rikers.

The language of the bill also leaves room for the authorities to hold kids in adult jails with "the approval of the Office of Children and Family Services."

A spokeswoman for state Sen. Velmanette Montgomery, who pushed for a simpler, more comprehensive raise the age bill, said she also was unsure on when young teens might be held in adult jails under the new law.

"We’re still going through it, honestly," spokeswoman Shakti Robbins-Cubas said. "There’s a lot of kind of nuances to it."

Alphonso David, chief counsel to the governor, said that the explanation for the caveat is straightforward, and that the option will almost never be used. He explained that there is already a similar allowance for younger kids to be held in adult jails, but that the only time this is ever done is when something like a blizzard or hurricane makes travel impossible and an adult facility is the closest. The Office of Children and Family Services has only ever granted such permission once in the last 30 years, during a winter storm, he said.

An OCFS spokesman did not have any comment by press time about what the language means.

Legal Aid Society chief defender Tina Luongo said that, apart from the differences of where teens are held and what court section they appear in, without further reforms to the bail system and a speedy-trial law, it's possible for there to be a repeat of Kalief Browder's situation. Browder was 16 when he was arrested for allegedly robbing a man of his backpack, then held on Rikers for three years before Bronx prosecutors dropped the charges. He spent most of 17 months in solitary confinement. He later killed himself.

De Blasio has curbed the use of solitary on young teens at Rikers, but it is still permitted at the state level in some instances. In 2011, 74 percent of felony cases in the Bronx were older than six months.

David, after falsely stating that Browder was charged with a nonviolent felony—he was charged with robbery and assault—said that the tests for violent felonies under the new system would have at least steered Browder's case into the youth section of court (in prosecutors' false narrative, Browder was unarmed when he committed the robbery). Beyond that, he suggested that Luongo and those who agree with her are letting the perfect be the enemy of the good.

"They’re conflating a number of things," he said. "We should reform our bail system and our speedy trial systems, but we shouldn’t negate the real achievement of raise the age legislation. Suggesting that the fact that we still need those reforms somehow undermines the significance of raise the age is inaccurate." 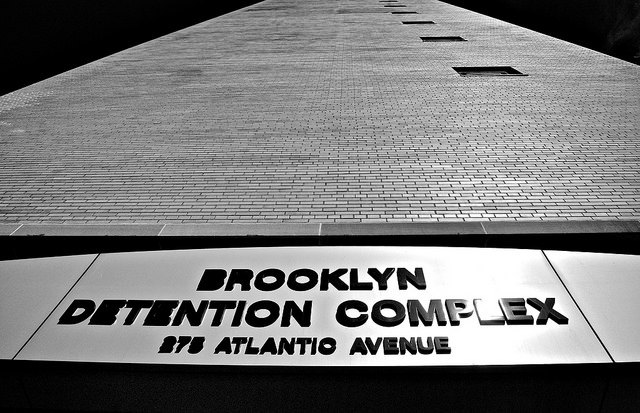 The planned closure of Rikers Island in 10 years combined with the state's demand to remove 16- and 17-year-olds from the island within 2 years means that the city and state are now scrambling to find new places to house inmates. The Brooklyn Detention Complex already houses about 800 adults awaiting trial. (Saundi Wilson/Flickr)

In a statement, Sen. Montgomery outlined her concerns with the compromise:

We steered the boat in the right direction for sure, but the loopholes left have the potential to shuttle this group of kids into the system through a different route. Children that remain in this new youth part of criminal court are still sentenced as adults, violations are still handled in local criminal court. Vehicular crimes and violations remain in criminal court with no chance for removal to family court. The 10-year wait to seal records can halt their progress during the time of their lives when they have the most potential for change. These kinds of details are important because what we want and what we know works are diversion programs and other age-appropriate treatment that keeps them out of the system and helps them succeed.

The details of these changes will have far-reaching impacts on thousands of young New Yorkers a year. Research suggests that the human brain is not fully developed until age 25, and that adolescents are by nature more impulsive than adults. Children jailed in adult facilities are more likely to be beaten by staff or attacked with a weapon by inmates, more likely to be raped, more likely to commit suicide, and more likely to be rearrested than their counterparts who go through the juvenile jail system.

In Michigan, where 17-year-olds are still automatically tried as adults and kids 14 and over are typically sentenced as adults for certain serious crimes, a high school classmate of mine was released a few years ago after serving 10 years in juvenile and adult prisons for attempted murder. He was arrested at 15.

My friend, who asked that his name not be used to protect his privacy, said that the private prison where he was held until age 18 was the site of constant fights, and that the warden's solution was to keep those who didn't have a job assignment locked down for 20 hours a day. He was moved to an adult prison early, because his juvenile prison was closed amid a series of scandals, and was in segregated youth custody until age 19. Then he entered general population.

"Most of the adults are generally calmer, but it’s still very dangerous, especially for a young person," he said, explaining that in adult prison, when people resort to violence, they are more likely to have a weapon, or to continue a beating beyond simply winning a fight. There are also sexual predators who fixate on young inmates.

"I was approached by many predators, who are people trying to seduce you and probably rape you," he said. "I was fortunate to dodge those bullets."

He was able to get his high school equivalency degree in youth prison, and although there were no programs for continuing education in the adult facility, he and his family were able to arrange an ad hoc correspondence course program with a local community college, and he came out with an associate and a bachelor's degree.

My friend is not up on national criminal justice policy trends, but said that fundamentally he believes children should be sentenced as children, because the premise of the juvenile justice system is to offer room for rehabilitation. He summed it up this way:

I’ve struggled with this. Obviously, I committed attempted murder. I pled guilty to that. It’s not so much the time as the philosophy of sentencing me as an adult, as opposed to sentencing me as a juvenile. When a juvenile gets out, your record is clear. When I moved to Texas [post-release], I found out I couldn’t rent an apartment. Everywhere I went, you had to check the box: "Have you committed a felony? I couldn’t even sublet. They’d kick me out. I’m going to be paying the price the rest of my life.