"LOOK!": The DOT's New Campaign To Get Pedestrians, Drivers To Pay Attention

Hundreds of dangerous intersections across NYC will be getting clever signage in the crosswalk stripes reminding pedestrians that sending a text message might be a little less important than the truck that's about to flatten them like pancakes. Designed by Pentagram, the "LOOK" pavement markings feature cute little eyeballs within the O's gazing happily in the direction of oncoming traffic. U.S. Transportation Secretary Ray LaHood joined NYC DOT Commissioner Janette Sadik-Khan at a press conference this morning to roll out the campaign, which has already popped up at dozens of intersections. 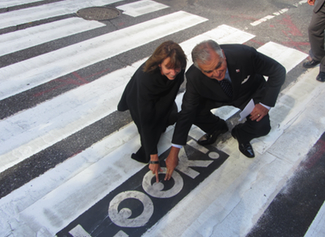 At the intersection of 42nd Street and 2nd Avenue, where 75 people have been injured between 2006 and 2010, Sadik-Khan told reporters that the new campaign is an attempt to create a "built-in safety manual for NYC. 'LOOK!' is a message to all New Yorkers that safety is in the eye of the beholder and everyone needs to keep an eye out for each other on our streets." LaHood called Sadik-Khan a "leader in safety" and said he had "no doubt" the campaign would spread to other cities. The Transportation Secretary also said that "80% of all pedestrian fatalities in America involve jaywalking."

In addition to the 'LOOK!' markings (which were inspired by a similar initiative Sadik-Khan noticed on a trip to London), the DOT is placing ads on nearby bus shelters, phone kiosks and other street furniture to target pedestrians. They feature photos of eyes and text urging New Yorkers to “Walk safe/Cross smart,” along with the "humorous reminder" that “Mom was right. Look before you cross the street.” There will also be ads on the backs of MTA buses urging drivers to "Drive smart/LOOK!", with the statistic that 57% of traffic fatalities involved pedestrians.

While public awareness campaigns are important, we wondered what efforts are being made to get the NYPD to enforce traffic laws and crack down on reckless drivers. The NYPD's repeated failure to press charges against drivers who kill or seriously injure pedestrians and cyclists has created such an uproar that the City Council has formed a task force to investigate the department's Accident Investigation Squad. 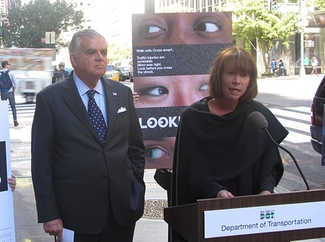 We asked Sadik-Khan if the DOT is working with the NYPD to increase enforcement on reckless drivers, and she told us, "We are working very closely with NYPD, and Commissioner Kelly in particular, on the accident investigations that take place in the city of New York and we are working on some campaigns on that regard as well. It's extremely important that we have an education campaign on traffic fatalities and we engineer our streets as safely as possible to make sure they are as safe to move along as possible, and the enforcement is another very important part of that."

Asked for specific details on how the DOT was working with Kelly, the Commissioner demurred, saying, "It's too early to give an announcement now." Sadik-Khan was also opaque on how much this campaign costs, insisting it was "pretty cost-effective," because the materials used are "already part of the portfolio of the Department. And we got funding from the U.S. DOT." UPDATE: A DOT spokesperson says, "The cost for the LOOK! stamps out now and yet to be installed comes to approximately $60k, mostly federal (FHWA) funds. The six-month safety ad campaign is approximately $1 million."

Sadik-Khan said the DOT would track the progress of the campaign with before-and-after comparisons of injuries at the intersections. Asked if there was any specific benchmark that would make the campaign a success, Sadik-Khan said, "Everything we can do to get New Yorkers to pay attention is a success. Again, one death is one death too many." 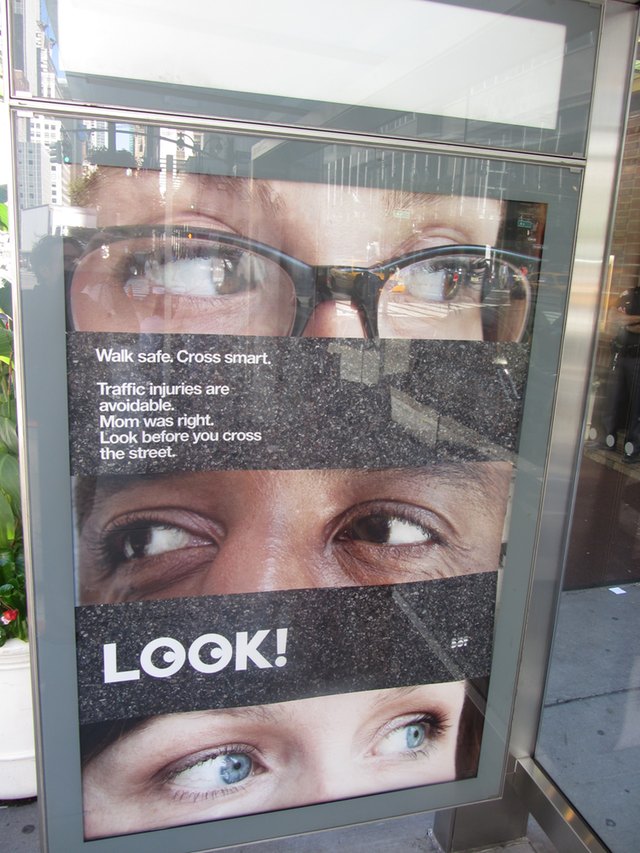