"Look At The Ass On Her": Stuff Bloomberg Says During Rich People Parties

Poor City Council Speaker Christine Quinn. If it's not the rumors that Mayor Bloomberg wanted Hillary Clinton as NYC's first female mayor or the scuttlebutt that he's quietly courting other people to be his successor, then he's basically hijacking her New York magazine cover story with a quote (about another woman): "Look at the ass on her." 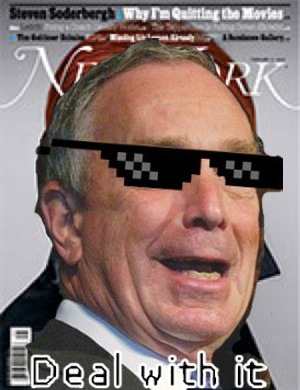 The cover story is supposed to let New Yorkers get to know Quinn, the leading mayoral contender for this year's election. But, deep into the story, writer Jonathan Van Meter recounts this charming anecdote, which ends up being the feature's most memorable takeaway:

As it happens, I was at a Christmas party for the rich just a few weeks ago. It was at a townhouse in the East Sixties, just off Park Avenue, and several times over the course of the evening the subject of Quinn came up. Each person I spoke with expressed doubts about whether she’s tough enough and smart enough to run the city. Implied, or overtly stated, was that the Bloomberg years have been marvelous and she’s no Bloomberg. By which they meant, if I understood correctly, that’s she’s just another politician.

Later in the evening, the host interrupted me to point out that the mayor himself had just arrived. Did I want to meet him? Sure. My friend and I followed the host over, shook Bloomberg’s hand, and my friend thanked him for his position on gun control. Without even acknowledging the comment, Bloomberg gestured toward a woman in a very tight floor-length gown standing nearby and said, “Look at the ass on her.”

The next biggest impression you get of Quinn is her fashion sense—also through the lens of "asshole" Mayor Bloomberg. Van Meter notes how sharp Quinn looks ("purple tweed blazer, a black flannel pencil skirt, gray nail polish, and a pair of soigné black English riding boots") and they start talking fashion on the way to a press conference with the mayor:

[S]he said, “The mayor is going to yell at me when I get out of the car because I have flat boots on. The mayor has no use for flat shoes.” Really, I said. Why would he care? “I was at a parade with him once and he said, ‘What are those?’ and I said, ‘They’re comfortable,’ and he said, ‘I never want to hear those words out of your mouth again.’ ” Everyone in the vehicle, including the security detail in the front seat, cracked up. “He likes me in high heels. Let’s see how long it takes before he notices.” She scrolled through her BlackBerry. “Another big thing with the mayor, when I am rooting … like, the couple of days a week before I need to get my hair colored, he’ll say, ‘Do you pay a lot to make your hair be two colors? Because now it’s three with the gray.’ And I’m like, ‘Did you wake up being this big of an asshole? Or did it take, like, all day to ramp up to it to be able to insult me like that?’ ”

OMG—we've got a great idea of Bloomberg's post-City Hall years. "Bloomberg Eye For The Straight (Or Gay) Guy (Or Girl)!" He's already got a television network—and everyone loves style coverage.

The mayor's press office has not yet responded to a request for comment, and we don't really expect a reply, but it was worth emailing them just to use "Look at the ass on her" in the subject line.

#ass
#ass man
#christine quinn
#mayor bloomberg
#speaker quinn
Do you know the scoop? Comment below or Send us a Tip