The Pulaski Bridge links the neighborhoods of Greenpoint and Long Island City, though more generally, it's an important nexus between Brooklyn and Queens. The divide often seems impenetrable for the people of either borough, but heading over the bridge reveals the apparent yawning chasm for what it actually is—a measly hop over Newtown Creek.

But with just one narrow-ass lane for both cyclists AND pedestrians heading both directions, the journey across the Pulaski Bridge is unnecessarily taxing. The DOT has been planning, for what feels like six ice ages, to convert a lane of traffic into a two-way protected bike path, but, as Streetsblog reports today, construction on the new lane has been pushed back to next year. Not only has work not actually started, but plans are still mired in the "review phase." 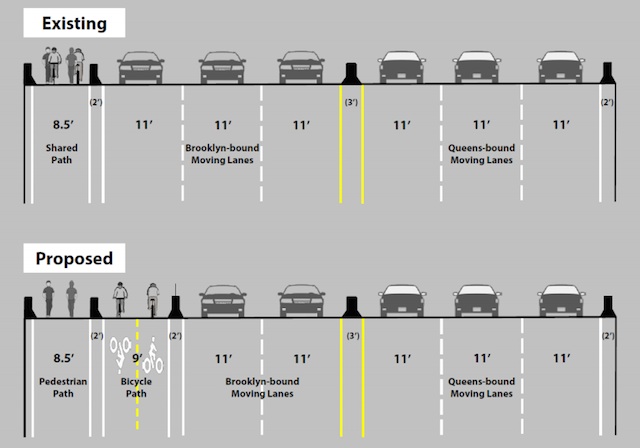 This is a far cry from the DOT's original goal of completing the conversion ahead of the summer's G train shutdown. The proposal was initially made in 2012 by Assemblyman Joe Lentol in response to the massive increase in foot and bike traffic across the bridge—according to a DOT study [PDF], the bridge saw a 47 percent jump in pedestrians between 2009 and 2013, and a 106 percent increase in cyclists over the same period. The current 8.5-foot-wide path is an exercise in irritation for everyone who uses it.

“The final bid from the contractor is under review by the Comptroller’s office. By the beginning of November, DOT will begin internal pre-construction meetings,” a spokesperson for Assembly Member Joe Lentol told the blog in an email. “By the time that process is done they will be headed toward winter and the holiday [construction] embargo. Does not look like work is going to begin this calendar year.”

In the meantime, just swim. Newtown Creek is great this time of year, and everyone knows that a rejuvenating "black mayonnaise plunge" is the new oil pulling.