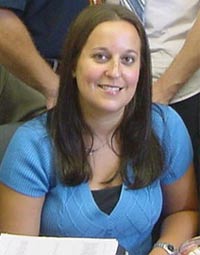 A 25-year-old female math teacher and track coach at Wantagh High School was accused of having sex with a 16-year-old male student. Heather Kennedy was arrested yesterday, charged with statutory rape and released on $35,000 bail.

According to police, the student had text-messaged Kennedy on March 19 and picked her up. After a few hours together, they went to the Massapequa High School parking lot where he "asked his teacher...if she wanted to have sex and she agreed."

The student broke his midnight curfew and, since his cellphone died, apparently called his father from Kennedy's phone, claiming he was with friends. But his father didn't believe him and the student eventually owned up to being with Kennedy. Detective Lt. Richard Zito said, "We believe it was a one-time incident."

Kennedy was immediately suspended with pay and is described as a well-liked teacher. One senior said Kennedy helped her get into Iona College, "She was the kind of teacher, if you had a problem, you could talk to her, and she would listen." Another said, "I'm really shocked. She's an amazing teacher. She's willing to do anything with the students."

#arrest
#Heather Kennedy
#Massapequa High School
#teacher student sex
#Wantagh High School
Do you know the scoop? Comment below or Send us a Tip
A new Gothamist is coming! We’ve moved comments over to our beta site. Click here to join the conversation and get a preview of our new website.