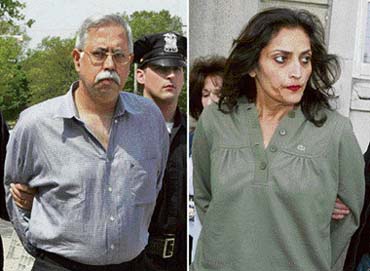 Remember that cruel(la) couple from Long Island that enslaved two Indonesian women who worked in their mansion? After their million dollar bail plan was announced back in June we hadn't heard much about these two. Today, however, silence was broken after Varsha Mahender Sabhnani and her hubby Mahender Murlidhar Sabhnani's trial has ended...and the latest is not good news for them!

The terrible two-some "were each convicted of all charges in a 12-count federal indictment that included forced labor, conspiracy, involuntary servitude, and harboring aliens." They could each face up to 40 years in prison after subjecting the women "to repeated psychological and physical abuse" and forcing them to work 18 hour days.

The Sabhnanis, who have four children and operate a worldwide perfume business out of their Muttontown home on Long Island's Gold Coast, could face up to 40 years in prison, although attorneys predicted the punishment would be considerably less. He is from India, and she is from Indonesia, but both are naturalized U.S. citizens.

One of the couple's daughters, Dakshina, collapsed in the front row as the verdict was read, prompting the judge to clear the courtroom while medical personnel attended to her. Fellow defense lawyer Stephen Scaring said another of the Sabhnanis' children, daughter Tina, told him: "We never did anything to anybody, how could this happen to us in America?"

It's called sweet justice, sweetheart. Perhaps they raised their children to believe that working 18 hours a day/7 days a week for $150/month was a good thing. And that beatings with brooms, slashings with knives and freezing cold showers were proper ways to treat employees.

Enung testified that Samirah's nude body once was covered in plastic wrapping tape on orders from Varsha Sabhnani, who then instructed Enung to rip it off. "When I pulled it off, she was screaming," the housekeeper said through an interpreter before breaking down in tears on the witness stand.

The Sabhnanis' defense attorneys argued the housekeepers "practiced witchcraft and may have abused themselves as part of an Indonesian self-mutilation ritual. They also said the couple went on frequent vacations that would have given the two women ample opportunity to flee." They will, of course, be filing a number of appeals after this outcome, but for the sake of humanity, we hope these two are behind bars for a considerable amount of time.