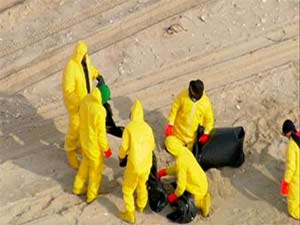 Crews are working to remove oil from Long Island shoreline that spilled into the ocean sometime on Thanksgiving Day and started washing ashore. Surfers called the Coast Guard to report "tar-like balls of oil."

A number of agencies, including the Coast Guard and NY State DEP, are working on the cleanup. The spill seems to be about 500 gallons of no. 6 oil, an unrefined bunker oil, and Newsday reports the samples from the spill will be compared with oil from the tanks of ships that had been in the area.

Miller Environmental Group was hired for the clean up, and MEG workers "used shovels and mesh scoops to pick up the oil, which had a soft plastic consistency and was scattered across the sand in blobs ranging in size from a BB to a fried egg." The State Department of Environmental Conservation says impact to wildlife does not seem serious and the oil did not seem to dilute into the water: "The cold weather helps because it makes the oil more solid."