The New York State Department of Environmental Conservation announced that it has ticketed four Long Island residents for capturing deer and using them as props for social media shenanigans. After taking the deer hostage, the men posted photographs of themselves with the animals on Instagram.

According to NBC New York, "The DEC says at least one of the fawns was chased with a vehicle and captured alongside a fence. Photos show one of the suspects holding a 'stressed' yearling. DEC Regional Director Peter A. Scully says such actions can hurt the wild animal, and the people." 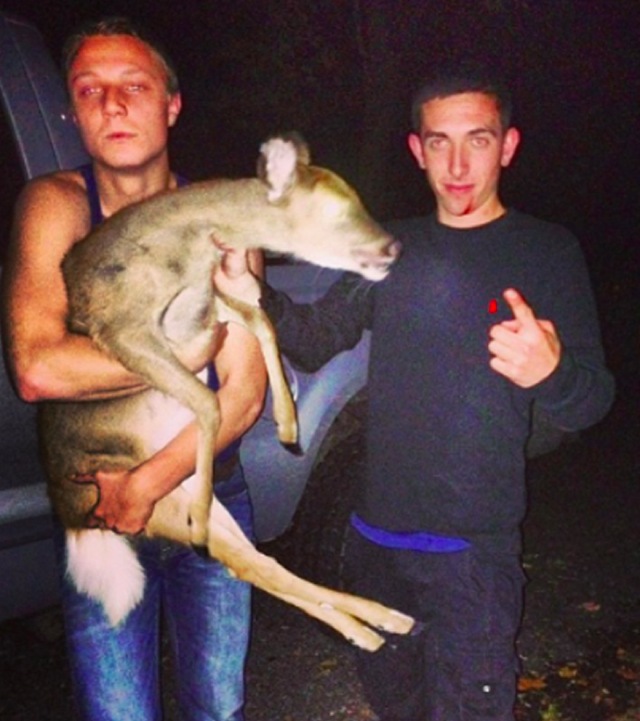 An anonymous source told the DEC about the images on Instagram and on November 1, DEC officers spoke to George Salzmann and three friends about the incidents. Newsday reports that Salzmann, 18, admitted "he had twice captured deer... Salzmann and Conor Lingerfelt, 19, of Jamesport, told officers they found the first deer trapped in a fence...[on] Oct. 25 or 26... [T]he second deer was captured on Oct. 29 by Salzmann; Lingerfelt; Joseph Sacchitello, 20, of Riverhead; and Anthony Infantolino, 20, of Wading River."

During the second incident, they were driving next to a fence and "steered the vehicle to trap the deer." Then they took the deer to Infantolino's house. The DEC released this home surveillance video of the deer being released from the home: