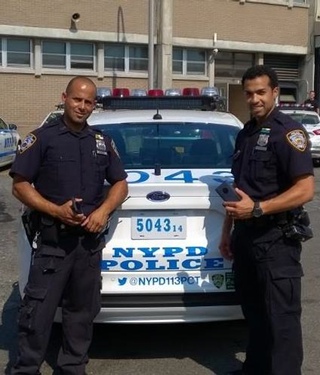 Officers Jose Suriel and Angel Ramos, who made the arrest. (NYPD)

Cops arrested a man in Queens on Monday morning after his story about his car being taken fell apart, and they discovered he may have crashed it hours earlier and fled the scene. The investigation began on Nashville Boulevard in St. Albans around 7 a.m., when officers responded to a 911 call reporting a stolen vehicle. When they arrived, Gary Joseph, 31, of Suffolk County, told them he'd left his car running with the keys in the ignition several hours earlier. He said he waited to report it because he thought someone was pranking him, according to police.

The officers ran the license plate and learned the car had been involved in a collision at 3:45 that morning at 198th Street and 122nd Avenue, a half-mile away. They contacted a witness, and that person gave of a description of the driver who fled the scene—a description that matched Joseph. The cops drove Joseph to the 113th Precinct station house and he allegedly confessed to the ruse, saying he was trying to avoid a cat when he swerved and hit three parked cars.

The NYPD is using the arrest to tout its equipping of officers with smartphones, which a release said made the quick investigation possible.

Joseph is being charged with filing a false report and leaving the scene of a crash. It was not immediately clear who his lawyer is.

#cops with smartphones
#crash
#false report
#nypd
#st albans
#vision zero
Do you know the scoop? Comment below or Send us a Tip