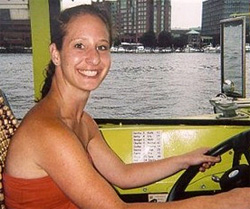 A 29-year-old schoolteacher has been missing since yesterday morning: Newsday reports that Leah Hirschel Walsh's "disabled car" was found "at daybreak Monday," on the side of the Seaford- Oyster Bay Expressway. Her purse was on the road.

Walsh had been on her way to work in Glen Cove, teaching autistic children. When she didn't arrive at the school, the school called her family, who then called the police. Her husband William Walsh said to reporters, as he gave them copies of her picture outside his in-laws' house, "Please get the picture out. We just want her back. You can have my cars. You can have everything. I just want my wife back."

Newsday adds that William Walsh, who apparently received a text from his wife early in the morning but didn't know where she was, is cooperating with the police. The Daily News spoke to a friend of Leah Walsh; Lucas Bean, who lives in L.A., said, "She was telling me that things are not going to work out with her and her husband and she had to tell me something very important, but she needed to wait til she got out of the car with him... She was in the car with him texting to me so that was Sunday night and they were in a huge fight."

Police are asking people with any information to call 800-244-TIPS.

#Leah Walsh
#long island
#missing
Do you know the scoop? Comment below or Send us a Tip