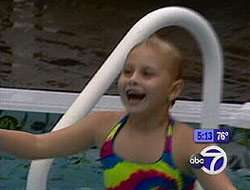 Even though the city is supposed to be noisy and bustling, the mayor reformed the noise code three years ago to make it easier for the police to crack down on complaints, as noise tends to be the city's number 1 quality-of-life complaint. But we haven't heard of any city dwellers being threatened with a fine or jail time for their noisy children - that seems to be a Long Island trend.

Bayville resident Mark Kostakis and six other neighbors complained about the 5- and 11-year-old daughters of neighbors William and Rachel Poczatek, namely the girls' backyard pool behavior which allegedly meant screaming and shrieking for hours on end. And a "village code enforcement officer" actually issued William Poczatek a notice of violation for his kids' screaming, saying it was an "unreasonable nuisance to neighbors" last month. Amusingly, the kids were lumped into an ordinance about "the shouting and crying of peddlers, hawkers and vendors." The Poczateks were issued a summons to appear in court earlier this week, facing a $250 fine and/or 15 days jail time for every day the violations continued. Enter a mini-media circus, aggrieved neighbors, aggrieved parents, and moppets demonstrating their swimming skills to local TV.

A village judge threw out the case yesterday, after the village prosecutor asked the charges be dismissed. The Poczateks are relieved and accused the Kostakises, who have no children, of being drags. But Kostakis told the Post, "I pull up to my house and it sounds like I'm pulling up to a football game. I just want to live my life. I'm a plumber. I work too hard to come home to this."

A legal battle may continue: The Kostakises were told by the village to record instances of the noisy kids, so they bought a videocamera to tape the kids. Now the Poczateks want the tapes destroyed. Not to mention that the summer has only just begun, which means days of playing in the pool!

And for your reading pleasure: The 25-page city noise code (PDF).