Mayor Bloomberg relentlessly touts his commitment to promoting "business incubators" for New York City's tech industry, and breathlessly announces new city-run social media channels that feature "custom link-shorteners" (yes, that happened). But in a wide-ranging interview with The Atlantic, the mayor sounds more like Ted Stevens than Steve Jobs. Rachel Haot, where are you?

Here is the billionaire media mogul and mayor of New York City answering a question about the future of journalism as it relates to technology:

I still think that the broadsheet is the way I want to get my news, but I've always thought we'll have a flexible page, where you squeeze this and it changes newspapers, squeeze this—and the battery and the stuff—information is stored in there and the whole thing just goes, and you've gotta come up with that.

Aww. How much do you think his Old Glory premiums are? Bloomberg also confessed to not knowing the difference between a blog and a newspaper when bemoaning the declining quality of journalism: "I don't know what the difference between a blog and a newspaper is…sometimes they have different standards, even under the same logo and the same name. So I think we've dumbed down, and it's not good for society." If you're wondering why the mayor seems so threatened by blogs right now, it may have something to do with the EXCLUSIVE video Gothamist obtained showing Hizzoner using a local Applebee's restroom (thanks to iReporter DeezNuts6669!): 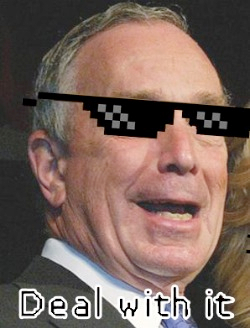 The interview, held the day the soda ban passed in September, is fairly expansive, with Bloomberg waxing about both President Obama's greatest achievement ("Just getting elected.") and Mitt Romney's greatest failure: "He walked away from everything he did." The mayor also defends his nannying, claims the Tea Party and Occupy Wall Street share a "sense of uneasiness," and even drops the F-bomb.

But when I walk down the street, cabdrivers, bus drivers stop the bus, trucks, people [say] "Good job, good job." And if that doesn't put a smile on your face, I don't know what does. And it's not just on the Upper East Side. When I go to neighborhoods where you'd think, What do they have in common with this 70-year-old white Jewish billionaire?, and yet, the reception -- -now, it's true that if they don't like you, most people would never scream at you and say "Fuck you." On the other hand, a big percentage of people smile and say "Good job." What they're thinking, I don't know.

The only time anybody's ever yelled at me on the subway -- a big hulking guy, on the other side of the train -- I got off and as I turned around as the doors closed, he screams at me, "Fix the Knicks!" This was eight, nine years ago. I can do a lot of things, but that ain't one of them, let me tell you.

#blogs
#mayor bloomberg
#series of tubes
#tech startups
#the Internet
Do you know the scoop? Comment below or Send us a Tip