Yesterday, police responded to a call about bodies falling from a 52-story building near Columbus Circle in Manhattan. They found a 35-year-old man, dead on a rooftop, and a three-year-old boy with severe trauma who later died at a hospital. Now it turns out the pair were a father and son, and the father had been scheduled to return the child to his estranged wife an hour earlier. 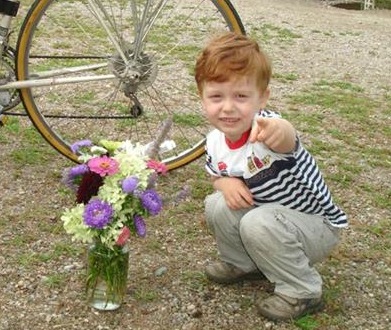 The man was identified as Dmitriy Kanarikov; his son was named Kiril. They lived in Mill Basin, Brooklyn and did not reside at 124 West 60th Street, the rental building where Kanarikov jumped from. It's unclear why he picked that building, but he did have a friend who lived there at one point.

Kanarikov had recently separated from his wife, Svetlana Bukharina. The Daily News reports, "Their breakup was so fraught with anger that they had to meet in a public place — the NYPD’s 17th Precinct stationhouse — to drop off and pick up their son, a source said."

The NY Times reports, "Instead, surveillance video viewed by detectives showed father and son walking into the building at 124 West 60th Street. Then witnesses described to the police seeing a body falling past their apartments at about noon. The bodies of the father and son were found on separate rooftops below the tower."

The Post's sources say the child’s mother, Svetlana, "is a mess," and that she told cops "her husband had previously 'threatened to kill himself and then kill our child.'" According to the tabloid's sources, she told cops on Sunday that "her husband was abusive and that they had squabbled over money... At one point, both she and the child had an order of protection against Kanarikov, but that was lifted in September."

A witness at the hospital also told the Post, "They were pumping [Kiril's] chest and working on him, and nothing... It was just heartbreaking ... They tried to do the best they could."

Residents of 124 West 60th Street said that a door accessing the rooftop was kept unlocked.

#124 west 60th street
#dmitry Kanarikov
#kiril Kanarikov
#murder-suicide
#Svetlana Bukharina
#tragedy
Do you know the scoop? Comment below or Send us a Tip