For those skeptical of verbal promises, Mayor de Blasio today reiterated his commitment to expanding subsidized ferry service in all five boroughs, releasing a rendering of a new ferry terminal planned for Red Hook. The terminal is projected to serve 6,000 residents, along a new South Brooklyn route set to launch next summer.

The new dock will be located at Atlantic Basin, near the Brooklyn Cruise Terminal. DNAInfo reports that the administration initially rejected the spot, citing concerns about heightened U.S. Coastguard security around cruise ships. Locals pushed back, arguing that Atlantic Basin is more accessible by foot and convenient to bus routes than the other spots being considered: near Ikea, Fairway Market on Van Brunt Street, and Valentino Park.

"It's full steam ahead for the launch of Citywide Ferry Service next year," the mayor stated on Wednesday. "Families and businesses in Red Hook have needed better transit options for decades. We're changing that."

New Astoria and Rockaway routes are also on track for 2017, according to the city.

The new ferry service will be operated by San Francisco-based Hornblower Cruises, which will receive an annual city subsidy between $10 and $20 million in addition to $55 million in initial funding. (New York Water Taxi, which currently offers cruises and an express shuttle from Wall Street to the Red Hook Ikea, has said that Hornblower's contract with the city could put them out of business before year's end.)

A trip will cost $2.75, equivalent to a single MetroCard swipe. But while riders will be able to transfer to the East River Ferry for free, fare integration with the subway and buses isn't set in stone, meaning unlimited monthly MetroCard holders could shoulder an extra cost.

Like Mayor de Blasio's Brooklyn Queens Connector proposal, the new ferry service is expected to increase property values along its route—about 8%, according to a 2013 Economic Development Corporation analysis.

Bronx and Lower East Side expanded ferry routes are projected to launch in 2018. A route connecting Wall Street's Pier 11 to Stapleton in Staten Island and Coney Island doesn't have an estimated timeline. You can peruse the planned routes below: 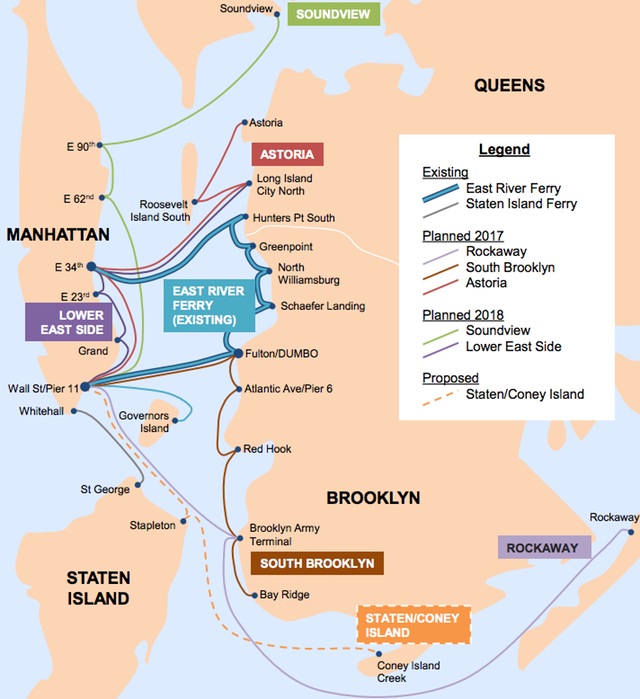 #bill de blasio
#ferries
#ferry maps
#mass transit
Do you know the scoop? Comment below or Send us a Tip