Speaking to a standing-room only crowd at a town hall in Mount Eden in the Bronx Thursday, City Council Members Vanessa Gibson and Fernando Cabrera announced that they would seek to delay a proposed rezoning of Jerome Avenue unless it includes more affordable housing for the area's poorest residents.

Many locals have expressed concern that affordable housing built under the current rezoning proposal, which would cover a 73-square-block commercial area around Jerome between 167th and 183rd Streets, would be out of reach for them, opening the doors for major displacement in an area where the median household income is just over $26,000.

"I will stand with you if it means we have to delay ULURP and push it back because we need to get this right," Gibson said, referring to the Uniform Land Use Review Process by which rezonings are approved. "I will support every position that you have and make sure it is a position that can be written into the final plan on Jerome."

The current city plan calls for the creation of 3,250 units—without a specific provision for the number of affordable units—and tens of thousands of square feet of space for community facilities like hospitals or churches, as well as new commercial and retail space. Developers who take city subsidies would be required to include affordable housing in their projects.

But advocates at the meeting said they feared that even if all developers take subsidies, many units would be too expensive for local residents.

According to the city, the rezoning plans are too preliminary for a specific breakdown of affordability of potential new units. Citywide, a quarter of affordable units financed so far under Mayor de Blasio's affordable housing plan have been targeted at families making under $40,000 a year (still far above the neighborhood's median income).

"In the housing plan, the City committed to reaching more of the lowest income New Yorkers," a spokesperson for the Department of Housing Preservation and Development told Gothamist. "While early in the process, we are actively engaged in discussions with residents of the Jerome Avenue neighborhood about the needs of the community, which will be reflected in future development proposals." The spokesperson also noted that Mayor de Blasio recently announced an additional $2 billion investment toward increased affordability. 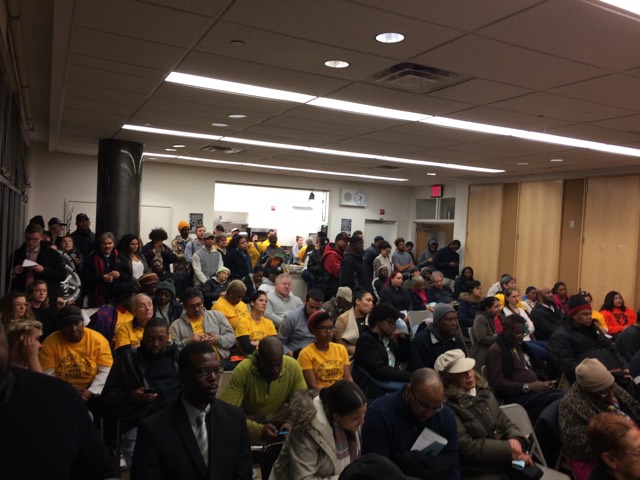 City Council members wield tremendous influence over rezoning projects in their districts, as it is customary for their colleagues to defer to their positions on a project. That gives Gibson and Cabrera an effective veto over any rezoning plan.

"None of us want this to fail," Gibson said. "I don't want to get to a point where I say to my colleagues 'I want you to vote no on Jerome.'"

Cabrera, who sat beside Gibson at a folding table, said he supported her commitment but encouraged constituents to continue rallying and raising awareness among community residents without completely ruling out the rezoning proposal.

"I've been through a ULURP and I can tell you the biggest leverage that we could ever have happens at the end because there's something about urgency, about creating a dynamic at the very end that they're going to have to give in and give us what we're asking for," Cabrera said. "Let's not give up the leverage we have, which happens, literally, at the 11:59 point 59 hour."

The city's proposal does not yet include local hiring or wage requirements, and a large group of union members turned out to advocate for guaranteed wage floors to encourage the use of union laborers. Wayne Molton, a member of the construction union Local 79, said he believed the plan should include prevailing wage requirements for all workers so that laborers earn a union-level salary.

"We are not against non-unions," Molton said. "We are mad because of the exploitation going down, the unsafe work practices going down, because we understand that billionaires are pocketing the money that belongs to this community."

Among attendees, there was a sense of trepidation about the big changes a rezoning would bring to the neighborhood. "I come from the Lower East Side and I can't move back there. I have friends in Williamsburg," Community Action for Safe Apartments organizer Carmen Vega-Rivera told Gothamist. "I saw what happened there firsthand and I now I see it's happening here."

"I have invested in my community and have waited many years to see the reinvestment return to me and my community and that has not happened," Vega-Rivera said. "So who are we building for? Is it for us? No. It's for others."