Mayor de Blasio's zoning initiative to help bring more affordable and senior housing to the East Village, the Lower East Side, and parts of Chinatown was met with deep skepticism at a Community Board 3 meeting last night.

The main feature of the City's proposal [PDF] allows for five-foot height increases to buildings, but with a cap placed on the number of stories each building can have. These additional five feet would be added only if they were used to expand the ground floor for commercial use.

As representatives from the Department of City Planning flipped through their PowerPoint slides, a few dozen community board members and residents bristled at the proposal.

"I think you've put up exactly what we don't want" said Anne Mitcheltree, gesturing to a sketch of a sterile, glass-bound restaurant.

In adding the five extra feet for retail opportunities, she said planners would be "creating a location to charge a lot of money for luxury-end businesses."

Frank Linkoff, a member of an LES tenants association, said that he's seen his neighbors pushed out to make room for millionaires. "To be blunt," he said, "It's becoming a rich white girl's dorm." 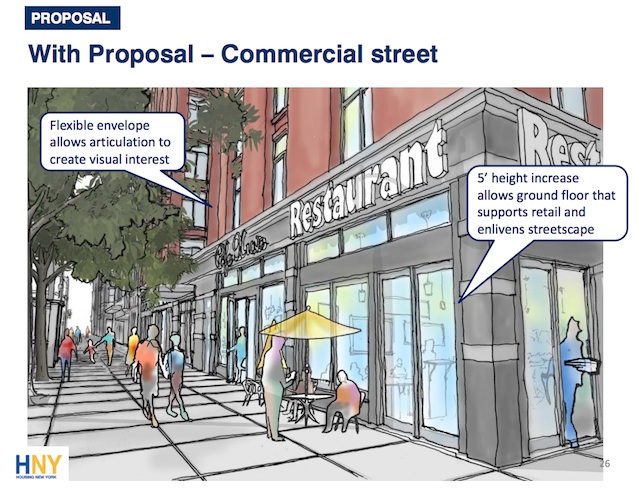 Senior City Planner Joel Kolkmann countered that the architectural plans take into careful consideration the character of the Lower East Side, pointing out that, in their current state, many buildings "don't echo the [others], which have features like bay windows and courtyards. Through these changes we're making buildings fit in better with the neighborhood."

A member of the Greenwich Village Society for Historic Preservation wasn't so sure.

"We're hearing assertions and hopes that if we add height we'll get more inclusionary housing, but we don't have facts," said director of East Village & special projects Karen Loew, "and that's not good enough for us to give up our contextual zoning that we fought so hard for."

Jean Standish of the Lower East Side Preservation Initiative added that the proposal treats the neighborhood with "too broad a brush" and doesn't recognize the special character of the squat buildings and the light and air flow of the historical LES.

Loew went on to read aloud a resolution CB3 had previously passed, explicitly opposing height increases as a means to generate affordable housing. She called the current de Blasio proposal a "public subsidy of private gain."

Aesthetics aside, board members and residents worry that tenants are increasingly forced to do battle with difficult landlords looking for big profits on the increasingly expensive Lower East Side.

"You're not being responsible when you tell us you're going to add additional pressure to tenants and worry about it later. You're not on the ground enough to see the heavy lifting, to see the families getting moved out," said CB 3 member Enrique Cruz.

Cruz suggested that City Planning require landlords to get a certificate of non-harassment to guarantee they will preserve the existing affordable units in their buildings and to show a commitment to their current tenants.

"You're getting a lot of money and we're taking care of the people," said CB 3 member and executive director of CAAAV, Cathy Dang. "We're giving money to millionaires and they end up pushing people out. Those people end up on the street, we're using our tax dollars to help them, and the developers are still getting paid." In the work she does with Chinatown residents, Dang said she's seen tenants hospitalized due to landlord negligence and abuse. "They're killing people in our communities," she said.

Dale Goodson, an Avenue A resident, thinks de Blasio and the City planners are simply too late.

"What they're trying to preserve is gone," he said. "Ten to 15 years ago bringing this idea to council and working to stabilize businesses would've been a good thing. Now you're bringing people to a neighborhood they can't afford to exist in." He added, "We need help right now as we are, the existing tenants. We're going to be gone by the time this plan gets here."

CB3 won't vote on the proposal until the end of November, but CB 3 member Cruz summed up the mood of the council floor succinctly: "Excuse me if we don't have a lot of faith based on what we've seen in the last 10 years in this community."

CORRECTION: An earlier version of this story attributed a quote to "Franklin Hoff." His name is actually "Frank Linkoff." We regret the error.