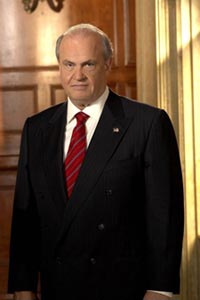 Fred Thompson was never an actual Manhattan District Attorney, he just played one TV. He used the same medium to announce that he was running for President by pursuing the Republican nomination Wednesday night on The Tonight Show with Jay Leno. Unlike California Governor Arnold Schwarzenegger, who announced his gubernatorial candidacy by appearing on The Tonight Show in person, Thompson made his announcement via a taped message that Leno aired. Speculation about the possibility of Thompson's imminent announcement has been growing recently.

The timing of Thompson's announcement seemed calculated to steal attention from the eight other Republicans who were debating for the fifth time in New Hampshire. Thompson skipped that debate, but aired a 30-second commercial during the event. In his Leno appearance, Thompson urged viewers to visit his campaign website to view a 15-minute video that detailed his decision to run.

Thompson portrayed Manhattan DA Arthur Branch for several seasons between 2002 and 2007 on Law & Order, after serving in the US Senate for nine years from 1994 to 2003. He filled the Tennessee seat previously held by Al Gore Jr., who vacated it to run on the Democratic Presidential ticket. He'll now be running against Sen. John McCain (R-AZ) for the Republican nomination, after serving as the National Co-Chairman of McCain's 2000 Presidential run.