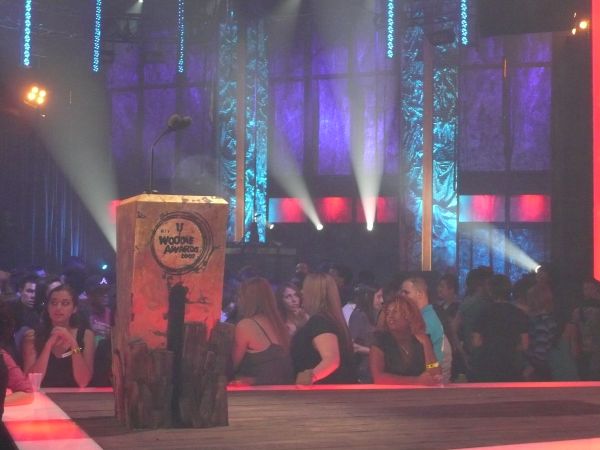 Want to just watch it on TV? Too bad -- unless you're willing to haul ass over to a college campus that gets mtvU. Ummmm, if you want to know about live performances from Rilo Kiley, Lupe Fiasco, Tokyo Police Club, The Academy Is… and Spank Rock, you're going to have to come crawling to our MAD EXCLUSIVE livebloggery!

9:55pm: Damn, kids are punctual these days! Show's over!?!?! What happened to being late for class and everything because you were out all night raising hell and occupying various administration buildings? There's an after-party, though! At Spotlight Live, a karaoke bar in Times Square! You know we love Times Square and all but... wish us luck braving the inevitable sausage factory that happens every time we try to leave Roseland.

9:53: Okay, Rilo Kiley is on; they just announced the award for Breaking Woodie. Who won? Let us know in the comments!!! Back on the Spank Rock incident, perhaps the best moment was when a member of his entourage rushed up and said: "Come on, man! We've got girls back here ready to party!" And Spank just kept on typing. Our kind of blogga. Maybe one day we can forgive the beer thing. MAYBE. You owe us a beer, Mr. Rock! Also, Spank was live-blogging while drinking OUR beer out of a stiletto heel.

9:49pm: We shamed Blagg into going on a beer run as payback for Spank Rock's OUTRAGEOUS behavior. An mtvU rep with a headset just came up to us and apologized for a long delay, explaining that there were fisticuffs backstage between Spank Rock and an unnamed... individual. Basically, Jared Leto. Anyway, that delay was an outrage! We're thinking about leaving after Blagg gets back with beer.

9:45pm: OKAY. So Spank Rock is talking sh*t on BWE about us: "I DRANK SOME BITCH ASS N*GGAS BEER. HE AIN’T DO SH*T. CAUSE I’M GANGSTER." Um, guess what Mr. Rock, we did do sh*t: WE blogged about it all over Gothamist. Your move, bitch! 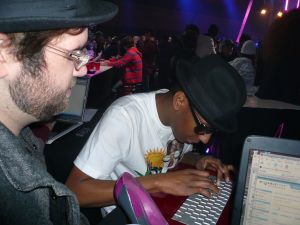 9:38pm: Welcome to the REAL world, college kids. Steal a poor blogga's beer, get rewarded with even MORE fame on BWE.

9:35pm: Yeah, well, somebody owes us a beer. We're not holding our breath on Spank Rock.

9:32pm: Can we all just agree to forget our first impression of The Academy Is... Thx! There's nothing going on now except some weird aural assault of sounds. ALSO, Spank Rock just grabbed our FULL cup of beer OFF the tiny table and drank it, despite our passionate protestations. And in return Blagg is inviting him to guest blog at BWE.

9:29pm: The Academy Is... in the midst of song two, a monstrous, fist-pumping, arena-rock Viacom-approved anthem!!! THE CROWD GOES NUTS!!! YEAH, BRO!!! Okay, it's Falling Down time. Good thing they didn't pat us down at the door. We'll be back in a minute with the body count. 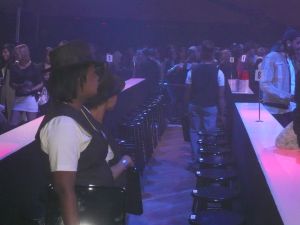 9:20pm: They make all the servers wear these depressing, circa 1990 black vests. We feel complicit. Are we complicit? Let us know in the comments. Also, The Academy Is... really not all that bad! They've got a string section on stage and their first song is big, sweeping, dramatic stuff. A little emo for our tastes, but they don't make us want to go all Falling Down. We need to leave the hate behind at this year's Woodies! Leto didn't have the stones to show his face, so we're going to give peace a chance.

9:15pm: Thom was nominated for that one: the Good Woodie. It went to... some other dudes? (In their speech one of them shouted: "Go Earth!") Whoever it was doesn't deserve it. Mental note: There's supposed to be some sort of live Radiohead webcast tomorrow afternoon.

9:14pm: Blagg went to the bar or bathroom. When he shut his laptop we noticed that he was given an MTV Networks Mac. Um, Where TF is OUR MTV Networks Mac?!?! We LOVE MTV networks! Yet it seems they don't love us in return. Sniff. Anyhoo, Lennox is still going on about human rights; she's announcing winners of the "Good Woodies". On a not altogether unrelated note, two dudes with backwards baseball caps got snubbed by Spank Rock's dancers. (It's the small justices that get us through.)

9:10pm: These tables are VERY small and we're VERY concerned about all the people who are bumping into it and jostling our drinks! Also, Annie Lennox is announcing an award. Respect!

9:09pm: Blagg, who we have the pleasure of sitting/bitching next too, just pointed out that the only "decent" music we're going to hear tonight is the filler music over the P.A. between awards. Which right now is Band of (Yawning) Horses. (Clever, eh?) Well, right now, that's as good as it gets. Ah, Babylon. At least the day-glo bikini broads who danced with Spank Rock are mingling among us blog-stained wretches. "The masses only care for two things: bread and circuses" - Juvenal.

9:00pm: BLEAGHH. Every time they announce nominees -- this time, FINALLY, Best Music on Campus -- a big screen shows a medley of all the nominees, and their "music". What follows is a deafening barrage of manufactured, tinny sound clips from bands that OUR CHILDREN our listening to in campuses across the country. We're a long way from 13 Songs, people. Pray with us?... Okay, Stella By Starlight won. Show Me Action wuz ROBBED!!!!

8:57pm: Every presenter who comes on prompts us to scream to whomever is in earshot: Who is this?! Heh? WHO? Motor City Traintracks?!!? It's loud in here. Apparently Motion City Soundtrack -- that's a band -- just announced the winner of the Viral Woodie. And the winner is... The.. Academy... Is... KILLING US WITH ELLIPSES!

8:52pm: We're back from the bathroom AND the bar. Spank Rock still on. SPANK ROCK RULES!!! The stage is packed with college kids dancing and a slew of lithe young ladies in day-glo bikinis. We love America!

8:46pm: Spank Rock and Santogold hit the stage with something from their Bangers & Cash project. "Hoochie Mama," for the ladies. "Rick Rubin" up next. Hey, did you hear he's gonna save the music industry?

8:44pm: Hey Gothamist readers, Stereogum here. You'd think we'd have something particularly fantastic to say about this award show on the music tip. But you'd be wrong; Say Anything's victory sucked our will to live. Not so coincidentally, it's increased our will to suck down Red Bull Vodkas. Only $14 each!!!

8:43pm: Going to the bathroom! Stereogum's in charge.

8:40pm: Danny Rocco, member of the band Show Me Action, just approached us. His band is nominated for Best Music on Campus, the award for best college band, which is supposed to be announced next! We're instructing Danny to get backstage and rehearse his speech. Charming young man, AND he talked to us. If Show Me Action loses we're leaving in protest.

8:35pm: TPC done. Bit of a lull here. Stereogum just sidled up wondering where the famous people are, spoiling for a rematch with Jared Leto. We thought we saw Carrot Top, but Stereogum says that individual is too thin for C-Top. We'll try to get a photo so you can settle the bet. No confirmed Leto sighting yet. Stay tuned.... Seriously. It's gonna get HOT in here! Please stay tuned.

8:28pm: Tokyo Police Club is cool, but they have a song with their band name in it. Is that okay now? Back in our day that was on par with wearing a band T-shirt to that band's show. Now they're playing another song, which will probably be over before we even finish this update.

8:27pm Tokyo Police Club is on. So we've got that going for us. Are any college students actually reading this? Speak up in the comments!!!! Tell us what The Academy Is... Most suspenseful band name ever!

8:20pm: Okay, it's cool, bro. Everything's cool. We convinced security that we weren't planning any stage crashing tonight and they agreed to permit our live bloggery as long as we put on this tracking ankle bracelet. Which reminds us, there's a rumor going around that Don't Tase Me Bro is going to present the Breaking Woodie award tonight. Confirm? Deny?

8:14pm: Well, now security wants to talk to us. This year's liveblog could be even shorter than last year... BRB!

8:13pm: Ah, haven't attended an MTV event since barging onstage during the 1999 VMAs and interrupting the Backstreet Boys to tell the world to WAKE UP AT THREE. Nobody heeded the wake up call then; now it's a new millennium and humanity's slothfulness has enabled the rise of Dick Cheney and 30 Seconds to Mars. (Gotta love EZ targets.) Anyway, it was all downhilll from there. UNTIL TONIGHT!

8:07pm: Okay, a little history about mtvU via wikipedia - you college kids should be familiar with that site:

On August 2, 2006, Viacom's mtvU announced an agreement to acquire Y2M Youth Media & Marketing Networks, the parent of College Publisher, the largest interactive network of online college newspapers in the US.

In February 2007, Viacom's mtvU announced an agreement to acquire RateMyProfessors.com, a website that allows college students to rate their professors.

8:01pm: Damn, college kids are punctual these days. Lupe Fiasco is on. It's okay to be jealous.

7:58pm: The mtvU Woodie Awards start in just two minutes!!! Who's excited? Who knows what mtvU is? (Let us know in the comments) Don't know what mtvU is? Go back to refreshing the NY Times homepage, old man! This award show isn't for yoU! [sic]