Sick of watching as adults fail, over and over again, to adequately address the global catastrophic threat posed by climate change, student activists will be taking to the streets on Friday to demand a solution to the intensifying crisis. Hundreds of thousands of outraged young people around the world are set to participate in today's Global Climate Strike, which was inspired by 16-year-old activist Greta Thunberg's weekly protests outside the Swedish Parliament.

The day of action comes as members of the first generation to experience the consequences of climate change have been mounting increasingly urgent climate protests. Multiple NYC students have been on strike for months, while the youth-led Sunrise Movement has pushed the Green New Deal to the forefront of the national conversation. At the end of January, nine protesters with the growing Extinction Rebellion movement were arrested at a "die-in" at Rockefeller Center. Still, there is little evidence that the United States is taking the "unprecedented" action required to cut carbon dioxide emissions in half by 2030, as the recent report released by the U.N.'s Intergovernmental Panel on Climate Change deemed necessary.

Here in New York City, students at dozens of schools across the five boroughs are striking to demand action. They'll be hosting multiple actions outside of City Hall, Columbus Circle, the Bronx High School For Science, and elsewhere. We'll have reporters (follow along with Caroline Lewis on Twitter) and photographers out in the field throughout the day, so check back for continuous updates.

UPDATE 11:30: College students have taken the stairs at Columbia’s Low Library, while a group of about 50 preteen activists are gathering right now at Washington Square Park. Asked what inspired her to strike today, Eliza Schwartz, an 8-year-old student at PS 11 in Chelsea, told Gothamist: "Well, mommy just has the news on after we get home and she's making dinner and sometimes I'm so bored I just listen. I'm pretty sure I'll still be alive when the Earth will just like get destroyed from all this pollution and everything, so I just wanted to help."

At noon, student advocates with at least a dozen schools are expected to rally outside of City Hall, led by youth leaders Zayne Cowie and Alexandria Villasenor, both of whom have been striking for months.

The family that strikes together... (My mom likes to be behind the camera).
On our way to #NYC #CityHall#fridaysforfuture #climatestrike #youthstrike4climate #parentsforfuture pic.twitter.com/dbW3stze5e

Students and @sunrisemvmt supporters gathering on the steps of Columbia’s Low Library as the first of many strikes kick off around NYC #ClimateStrike pic.twitter.com/IN9muhoG3b

UPDATE 12:05 p.m: Students at Bronx Science have walked out of class, and are now rallying on the football field. “Although we can’t vote, we showed our politicians what we want,” said one activist, to the applause of her classmates. “This is want all of the kids in the world want.”

The group is also chanting: “You should be embarrassed that we pulled out of of Paris,” a reference to President Trump’s decision to withdraw the United States from the Paris Climate Accord.

UPDATE 12:30 p.m.: Hundreds of students are now rallying outside City Hall. Rachel Entin-Bell, an 8th grader at M.S. 839 in Kensington, Brooklyn, said that her frustration with older generations’ inaction on climate change inspired her to join the movement.

“They can’t just leave a falling apart planet to us,” Enti-Bell told Gothamist. “We only have so much time to fix it, and we have to fix it while we still can, because by the time we’re in power we can’t fix it.” 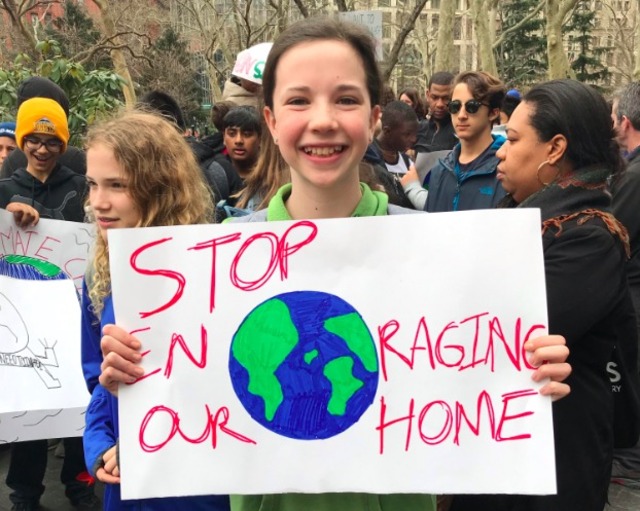 The 13-year-old also spoke about the importance of schools teaching students about climate change from a young age: “If we don’t learn about it we might believe the things that are lies, that it’s a hoax... People are trying to hide it from us so they can benefit and make us buy things that aren’t benefitting the planet. We’re going to ruin our planet by that.”

“Sea levels are rising ... and so are we!” #ClimateStrike at City Hall. pic.twitter.com/yOor32CdPi

People, mostly kids, lining up outside City Hall to call for action on climate change. pic.twitter.com/glUy3sPkSb

Katie Bradley, a biology teacher at the Winchendon School in Clinton Hill and adjunct professor at CUNY, said her high school students were permitted to join the strike because its "more valuable than anything we were gong to do in the classroom."

"It’s inspiring, it’s heartening, and also infuriating that this is their burden when I think they should be able to do other things," said Bradley.

UPDATE 3:50 p.m. Student activists who converged earlier at Columbus Circle have have marched up to the Museum of Natural History. Overheard chants include "Fuck Donald Trump" and "Congress Congress say fuck you/We deserve a future too."

The Columbus Circle demonstration was organized by Zero Hour, a student-led climate group that previously hosted last summer's Youth Climate March. Currently, there are hundreds of students gathered on the steps in front of the Museum of Natural History, where they are staging a die-in and chanting in support of the Green New Deal. Some students have also begun blocking traffic at West 81st Street.

NYC students are holding a die-in at the American Museum of Natural History #climatestrike pic.twitter.com/xgcnGTvxjV

“Money won’t matter when we’re dead,” they chant as they “die in” at the American Museum of Natural History. #ClimateStrike #ClimateStrikeNYC

UPDATE 3/16/19: Police say that 16 protesters were arrested for blocking the street outside the Museum of Natural History on Friday evening. They face charges of disorderly conduct, blocking traffic, and refusing a lawful order to disburse, and have been issued desk appearance tickets, according to a spokesperson for the NYPD.

If you're a student who's striking today, drop us a line at tips@gothamist.com, or tag us on Twitter @Gothamist.

#climate change
#global warming
#liveblog
#protest
#rally
#student activists
#original
Do you know the scoop? Comment below or Send us a Tip