[UPDATE: For exclusive photos of this morning's protests and arrests, go here.] Good morning, and good luck getting around the Financial District this morning, as Occupy Wall Street protesters attempt once again to block access to the Stock Exchange by forming a "people's wall." Gothamist's Chris Robbins and others are reporting from area; we'll update this post throughout the morning with news as it comes in. Currently, workers on 11 Wall St are having real trouble getting past NYPD barricades to get to work. “I told [my boss] three frickin’ times, it’s stupid," one employee told us.

Check here for our roundup of what to expect today from Occupy Wall Street, and here's a map [pdf] that details protesters' plans this morning. The Twitter hashtags #S17 and #S17nyc is also full of updates, and Tim Pool is livestreaming:

Update 7:40 a.m.: Hundreds of protesters are amassing at Zuccotti Park in preparation, as well as at the Vietnam Veterans Memorial at 55 Water Street, where riot police stand ready. It appears that demonstrators are waiting to reach critical mass before making any moves. Stay tuned. 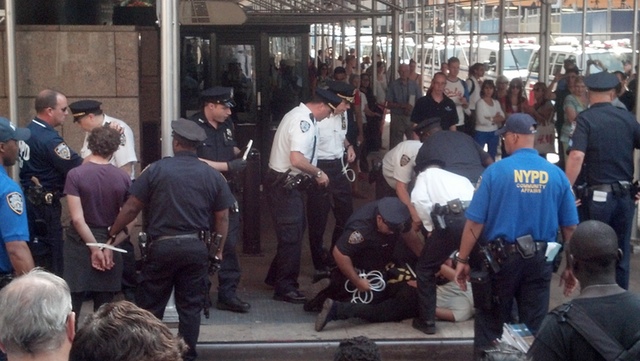 Arrests at the corner of Trinity and Liberty at approximately 3:45 p.m. (Courtesy Rossen)

Update 7:55 a.m.: Several demonstrators who sat down in front of barricades at Wall Street and Broadway were just arrested. 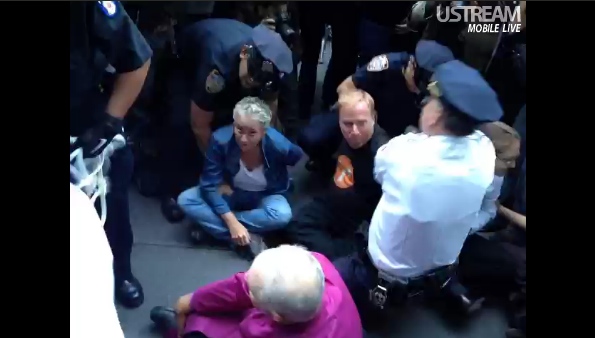 Update 8:15 a.m.:at least five arrests were made during a march at Pine and Nassau. Officers violently slammed a protester against a car at Pine & Nassau while effecting one arrest. At least 1,000 protesters have filled the intersection, and Timcast says a woman has just collapsed in the street. Here's the latest from attorney Gideon Oliver, president of the National Lawyers Guild - New York Chapter:

#ows #s17 Around 25 arrests so far today - including a working Legal Observer.

Guy walking to work shoves past #OWS, screaming “I GOTTA FEED MY FAMILY,” someone replies, “You’ll be fired someday. Everyone will be”

Update 9:07 a.m.: Artist Molly Crabapple is among those arrested, and she's making tweets from the police van.

Update 9:19 a.m.: A protester named Anna Robin was violently arrested at Pine and William—Robbins witnessed police shoving her face into the pavement during the arrest. MTA spokesman Kevin Ortiz says, via Twitter, "Due to Occupy Wall Street protests, J trains are currently terminating at Fulton Street."

Update 9:29 a.m.: Here's video of a man on the ground resisting arrest and calling officers "terrorists":

And another video of protesters amassed earlier this morning, including another arrest:

Update 9:34 a.m.: Gideon Oliver, president of the National Lawyers Guild - New York Chapter, now says at least 50 arrests have been made. In addition, hula hoops have been seized:

Update 10:30 a.m.:According to Robbins, there is currently a "huge convergence at Bowling Green next to Wall Street bull, several thousand lining streets."

Update 10:56 a.m.: The atmosphere around Bowling Green is currently calm, but officials at The National Museum of the American Indian aren't taking any chances. Security at the museum would not allow Robbins inside, and an employee there tells us it's because of Occupy Wall Street protests. However, tourists who don't fit the "Occupy" stereotype have been seen entering and exiting, and a National Lawyers Guild legal observer museum was falsely told "the museum open but you can't bring in backpacks or signs." So tuck your dreads into an "I Heart NY" baseball cap and give it a shot!

Update 11:51 a.m.: As of 11:30 a.m., over 100 people have been arrested, according to Gideon Oliver, president of the National Lawyers Guild - New York Chapter. Several of them were in wheelchairs, according to one witness, below. Hundreds of protesters are currently amassed in Battery Park to plan their next move.

Labor unions all taking a stand on top of the steps in Zuccotti. Local news affiliates are here taking notice yfrog.com/mm324wbj #ows

Update 2:29 p.m.: After meetings in Battery Park, hundreds of protesters proceeded to the World Financial Center, where a car expo is being held on property owned by Brookfield (which also controls Zuccotti Park). At least half a dozen protesters who sat down on West Street have just been arrested. Over by the West Side Highway, protesters attempted to block the road, and one demonstrator was pepper sprayed.

Meanwhile, Zuccotti Park is, in the words of one protester, "full of life & liberty again."

Update 2:46 p.m.: One protester, Julene Garcia, saw her boyfriend Hugo Duran get arrested on the West Side Highway. "He got pushed [off the median] and separated from me, and they tackled him down to the ground," she told us, through tears. "He wasn't even resisting arrest, he just got pushed off the sidewalk. He doesn't need this, and there's nothing I can do to help him." She tells us Duran was charged a few a months ago for a crime unrelated to Occupy Wall Street, but Garcia declined to elaborate.

Update 3:23 p.m.: Here's video from the West Side Highway showing NYPD seizing protesters' banners as they occupy the middle of the road:

Update 4:18 p.m.: Demonstrators are currently marching toward Wall Street for the 4:30 "People's Gong"—their answer to the Stock Exchange's closing bell. After that, they'll head back to Zuccotti Park for a popular assembly. There are clashes between the NYPD and marching protesters, with at least one arrest so far on this particular action. According to Robbins, at the intersection of Marketfield & Beaver "at least 300 NYPD intercepted the march," where a "cop angrily confiscated flag for not being on cardboard pole."

Update 4:33 p.m.: Journalist and indefatigable Occupy Wall Street reporter John Knefel is among those arrested, according to The Nation reporter Allison Kilkenny and others.

They just arrested @johnknefel. Unfuckingbelievable. Just yanked him off the sidewalk, threw him facedown on street.

#occupy wall street
#ows
#protest
#original
Do you know the scoop? Comment below or Send us a Tip