Starting at 4:30 p.m., Occupy Wall Street protesters will be joined by tens of thousands of students, transit and city workers, teachers, and other union officials for a march from City Hall to the Financial District. Unlike last Saturday's tense confrontations between protesters and police on the Brooklyn Bridge, organizers have gotten an event permit for today's activities from the NYPD, according to the Journal, so it is expected to go a lot smoother than last weekend. But with more than 3,000 people expected to show up, it's anyone's guess how things will actually go. You can watch the live stream below, and we'll update this post as the day progresses. [Updates Below!]

Update 3:30 p.m.: Thousands of students have committed to walking out of their classes to show solidarity and march down to City Hall with protesters this afternoon. Walkouts have been scheduled for 3:30 p.m. for Columbia, and 4 p.m. for NYU and the New School—but it seems Julliard has already gotten a head start on them. 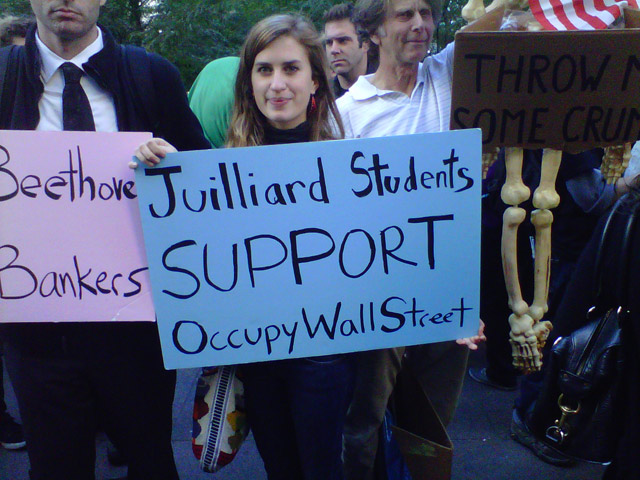 Update 3:50 p.m.: According to DemocracyNow and The Nation reporter Allison Kilkenny, marchers have started making their way slowly toward Broadway. Below, you can see a picture of one marcher holding up the cuffs he was arrested with on the Brooklyn Bridge. 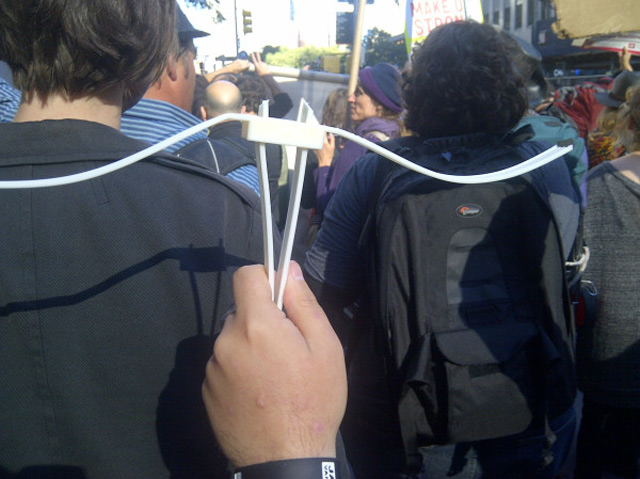 Here's a view of the march from Foley Square: 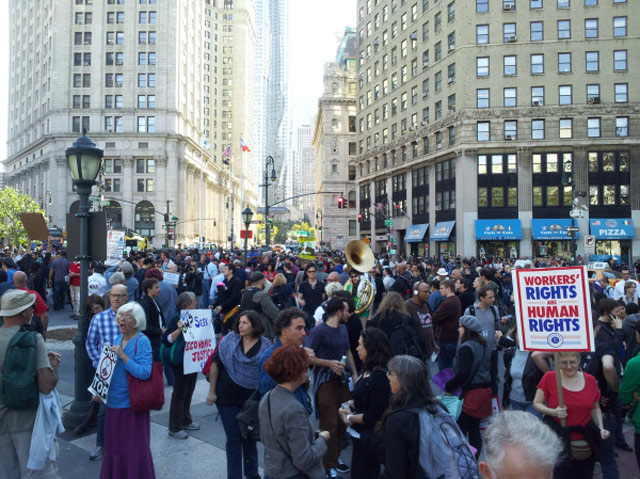 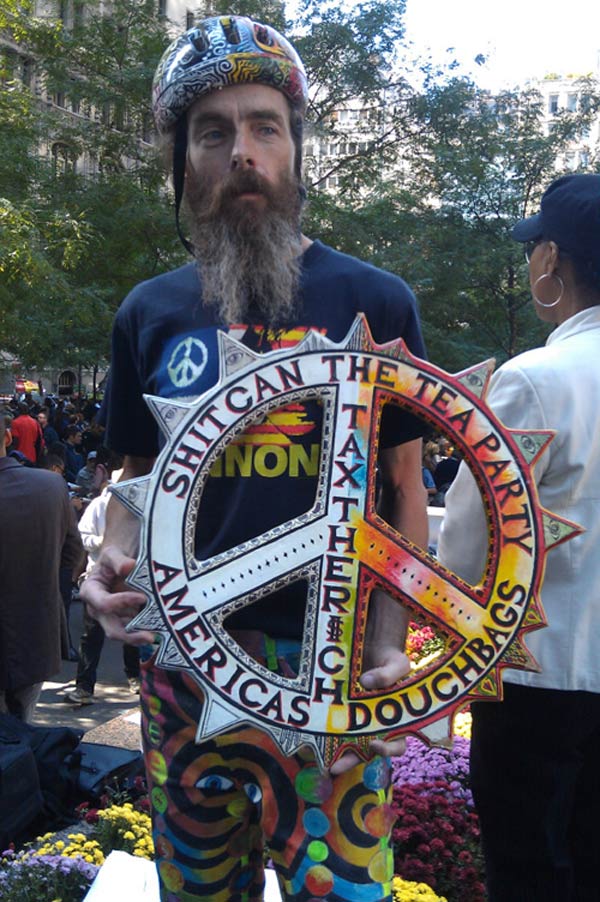 Below, you can see a picture of the Nurses Union arriving in Foley Square. 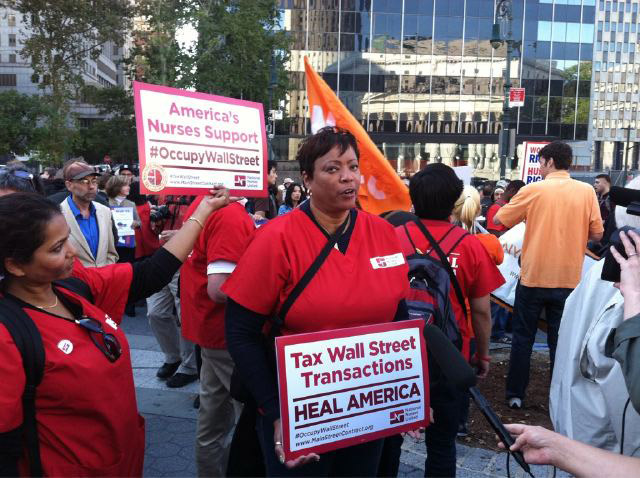 Update 4:40 p.m.: According to our reporter at the scene, Christopher Robbins, there are easily over 1,000 people assembled in Foley Square right now. The TWU Local 100 speaker just gave "a very jobs-heavy speech," which prompted some eye-rolling amongst the younger marchers. Many of those younger OWS protesters below the fountain have started marching, and seem somewhat distinct from the unions above the fountain in the square. 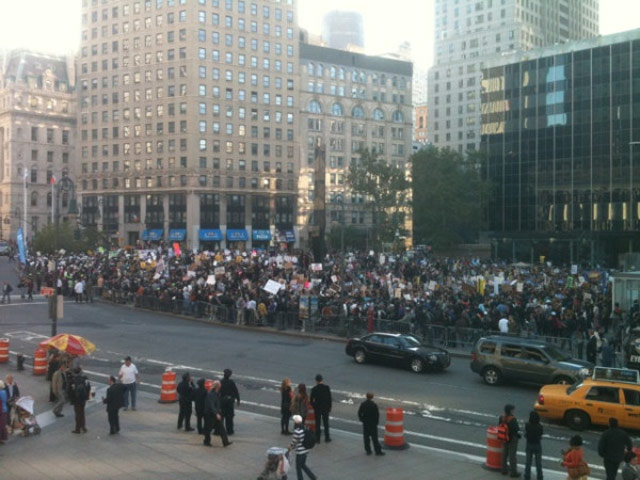 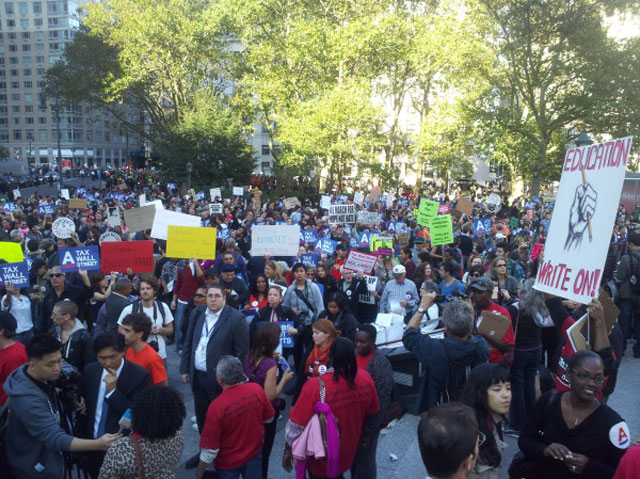 It seems as though there has been a very friendly atmosphere around the protest thus far—tourists on buses are waving and cheering, and police are controlling traffic around the marchers. Nevertheless, some have taken note that police are carrying lots of visible plastic zip handcuffs (and orange nets) with them: 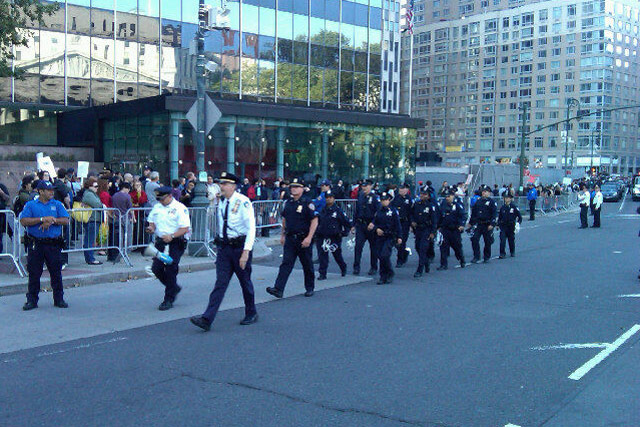 Here's another popular chant that has been heard amongst protesters: "Q: "How do we end this deficit?" A: "End the war, tax the rich.'" 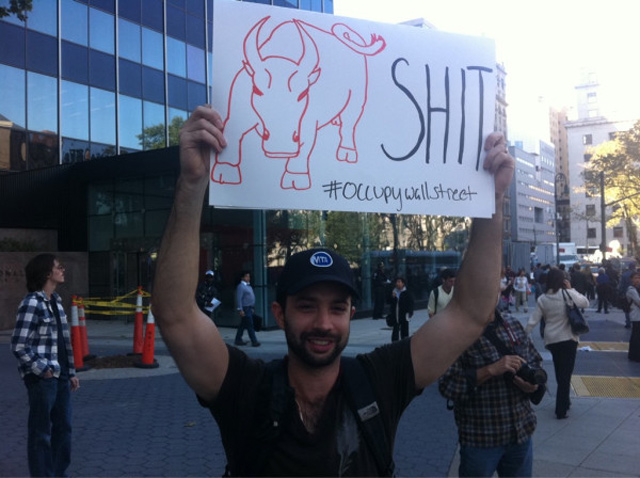 Update 4:55 p.m.: Word from the ground is that there appears to be over 3,000 protesters in front of the US courthouse, and the cowbells and snare drums seem to be growing larger. And more are on the way: "Just saw the New School conglomerate headed towards Wall Street with sexy banners and drums!"

Union officials, including President of the United Federation of Teachers Michael Mulgrew, have been taking turns speaking to protesters at the square. "We could close down this city right now," seems to be the first line from a union speaker that has inspired wide applause from the crowd. 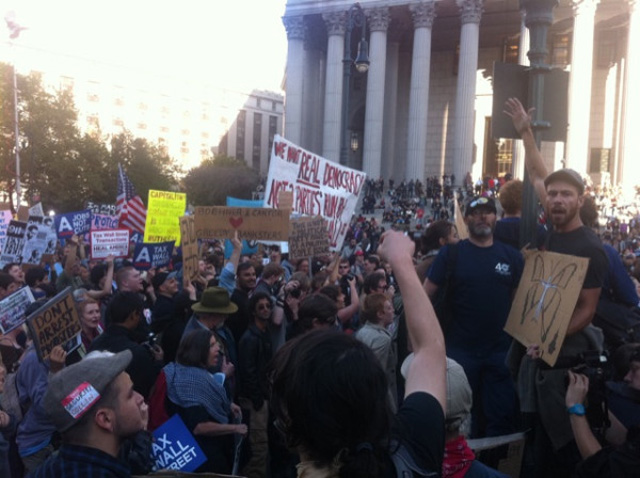 There have already been reports of some uncomfortable/confusing interactions with police: Phillip Anderson tweeted, "Cop 2 mins ago: "stand over there plz" We comply. NYPD comm affairs cop just now. "You can't stand there.'" Josh Pollock tweeted, "cops are blocking Broadway marchers sticking to sidewalk." 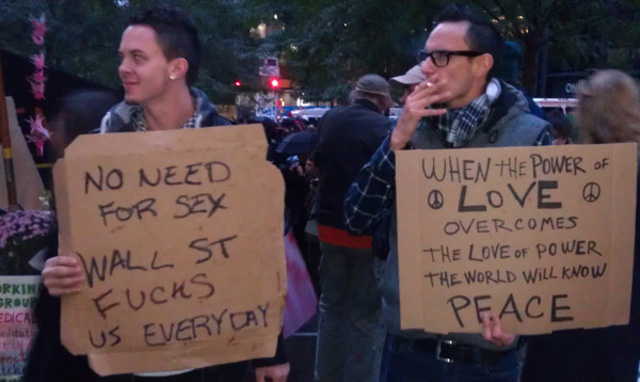 Here are two pictures from a Gothamist contributor of marchers walking up Lafayette near Bleeker. 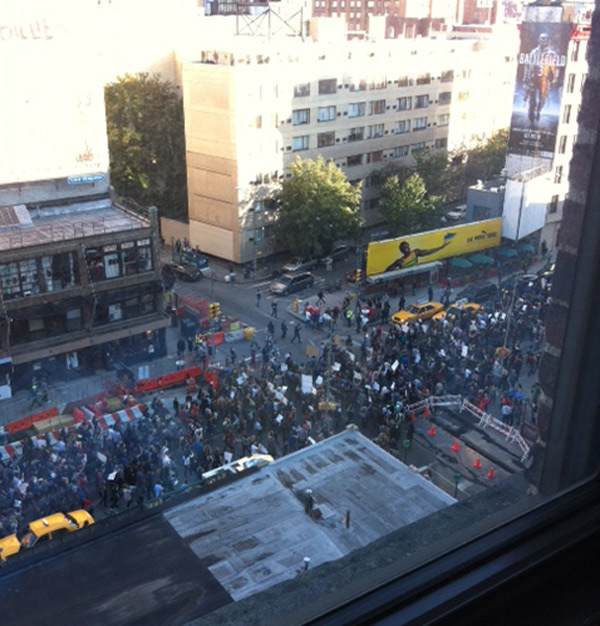 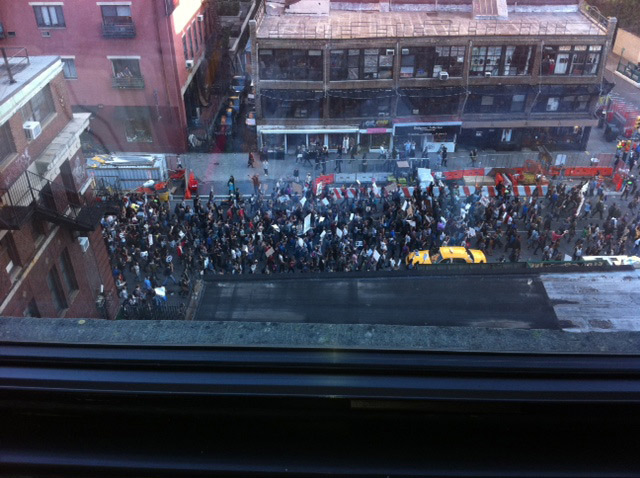 Update 5:10 p.m.: The crowd has swelled to over 5,000 in the square at this point. One union speaker just said, "Media says there's no message, but they're wrong—it's about creating a new paradigm in this country." One thing is for sure: there are more media on the ground at today's march than at any other OWS event thus far. Amy Resnick tweeted, "Looks like more photographers cops and journalists than protesters the #occupywallstreet march in Soho." 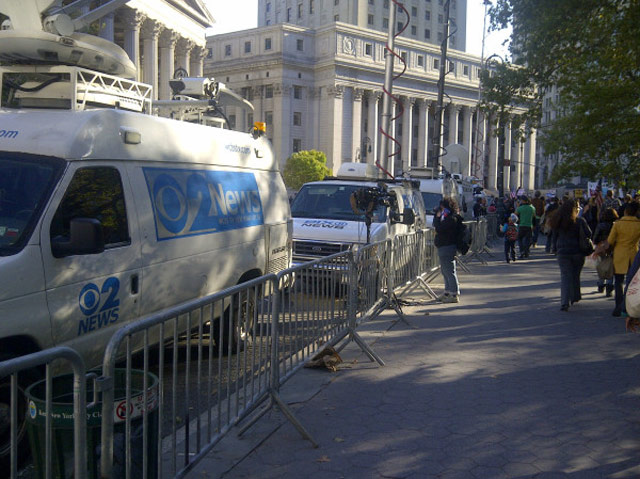 If you're still thinking about heading to the square to join in, now might be a good time to hail a taxi according to Nick Gulotta: "I told my taxi driver that I was going to #occupywallstreet and he turned the meter off!" There are also some very small protesters in the crowd: 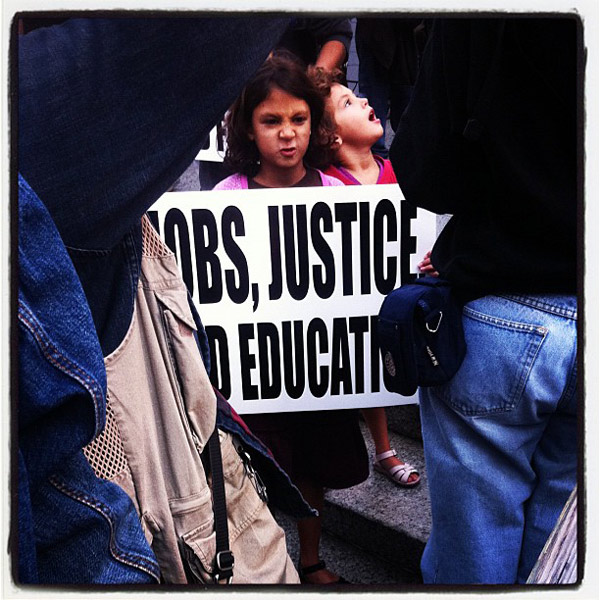 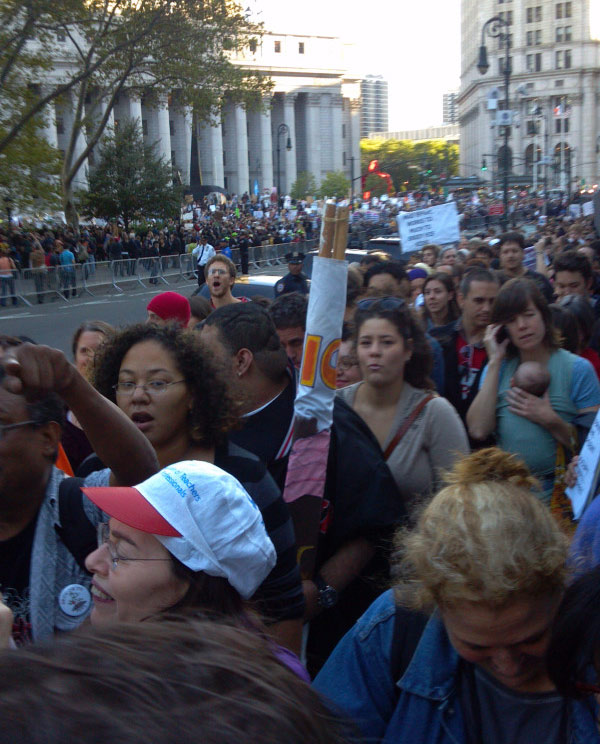 Update 5:20 p.m.: The marchers should be moving toward Wall Street any minute now. The last few union officials are finishing up speaking, including Union President John Samuelsen who thanked OWS protesters for "sparking the Labor movement"—he credited them with "showing us the way to do it...not by having conversations with politicians, but by taking it to the streets." Another said, "I can say on behalf of the U.S. Military: thank you Occupy Wall Street, thank you New York."

Here's some quick videos (via The Observer) of what it's like in the thick of Foley Square:

According to amNY, "NYPD tells us there have been NO reports of arrests or any type of incidents for #OccupyWallStreet at Foley Square."

Update 5:40 p.m.: The march to Wall Street has officially begun now...but not without some hitches. The roads in lower Manhattan are completely shut down because of the enormous amount of people struggling to walk—there's massive bottlenecking happening around Lafayette Street, because there are literally "too many people." Police have even "widened the barriers in anticipation of a larger crowd." The march is now a crawl. 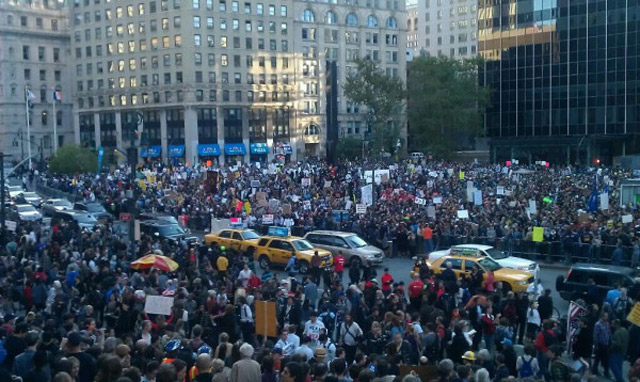 Below, you can see Centre Street, closed to vehicular traffic, filling with people: 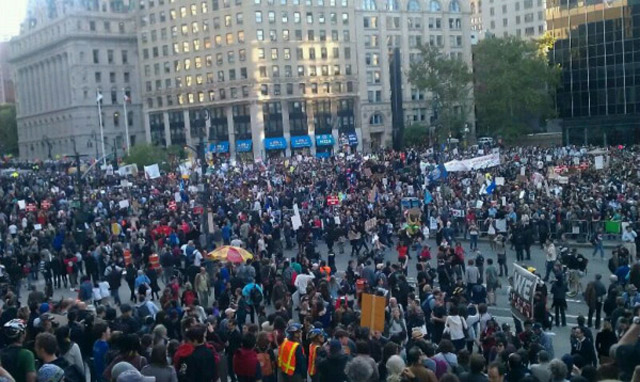 People say they have spotted Tim Robbins, members of Sonic Youth, Reverend Billy, and possibly Michael Moore, amongst the crowds. And these people: 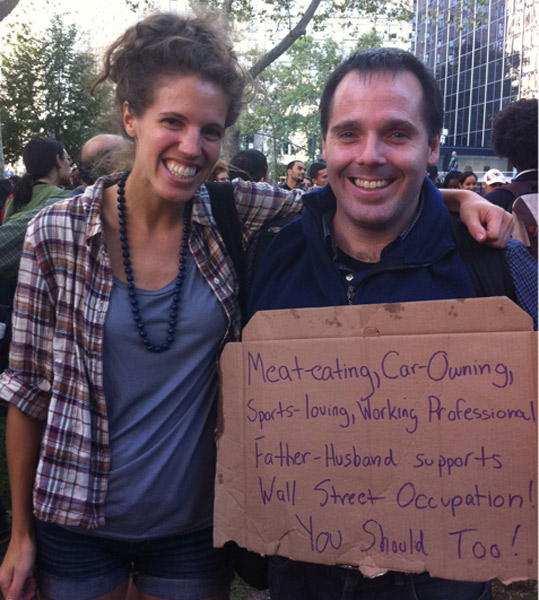 Update 5:50 p.m.: We now estimate there are at least 10,000 people downtown, possibly bigger than the anti-Wall Street march last May. Protesters are stopped near Broadway and Chambers currently. However, things may be heating up soon: "The barrier's been broken on Chambers. There are gonna be arrests." 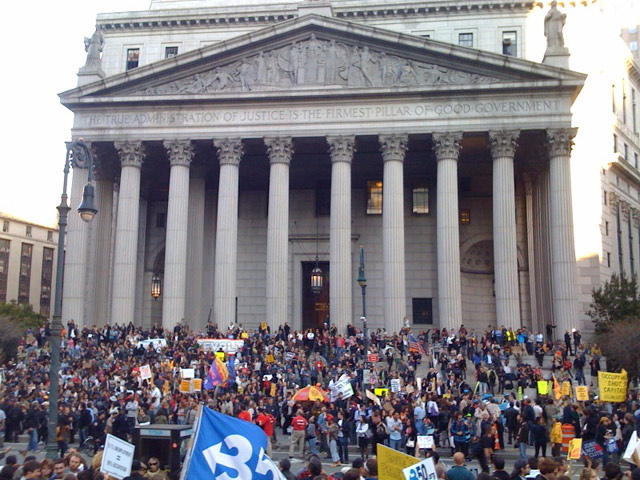 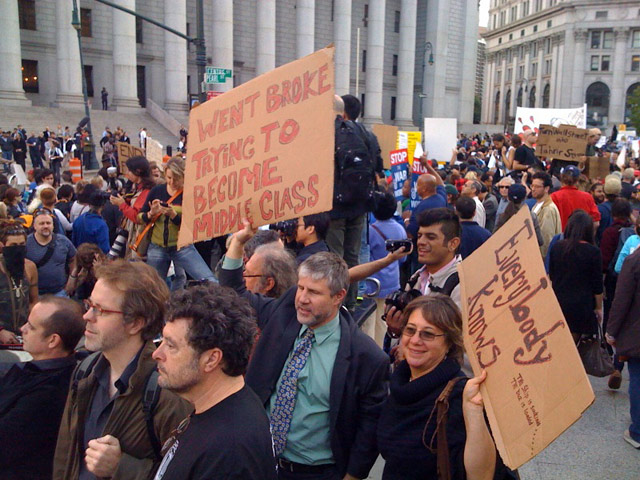 Update 6:10 p.m.: Things seem to be getting tenser down at Broadway and Chambers. We've heard reports of the crowd screaming at police to let them march. A protester knocked down several barricades, then ran off, while detectives nearby did nothing. But the crowd is incredibly diverse: all ages, ethnicities, "like a goddamn college brochure."

The bottlenecking continues, with thousands trapped inside (and outside) the police barricades. There are reports of four NYPD helicopters hovering over the route. The smell of Tasti D Lite fumes are wafting through the air, teasing hungry, trapped protesters. But some marchers have arrive at Zuccotti Park.

Broadway has now been shut down below Canal Street. Here's the view looking up Broadway from Zuccotti Park: 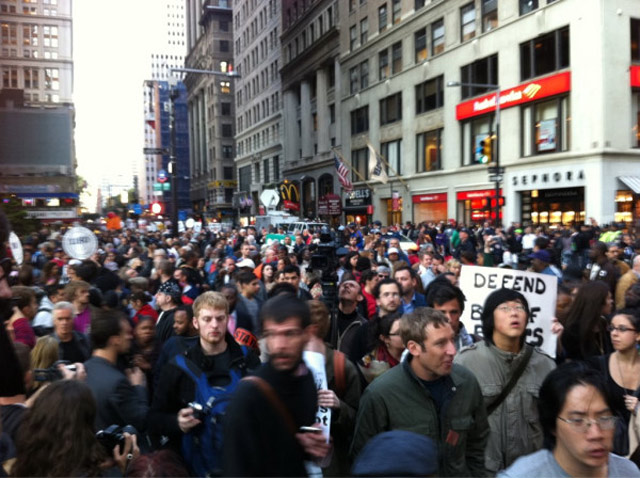 An NYPD blue shirt was overheard saying to a protester: "You wouldn't last two minutes in my job. They'd take your shoes and you'd be naked out on the street." Another was heard saying, "I can't help but laugh."

Update 6:35 p.m.: According to NY1 reporter Josh Robin, "Organizers at #occupywallstreet claiming 20K protest. I can't vouch for that hi; largest rally I've seen in several years." Here's a screen shot, via CNN, of the protesters from above: 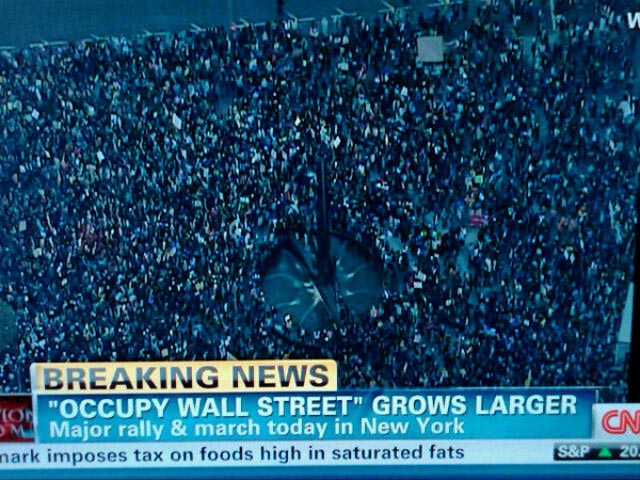 #City hall
#march
#nypd
#occupy wall street
#protest
#union
Do you know the scoop? Comment below or Send us a Tip