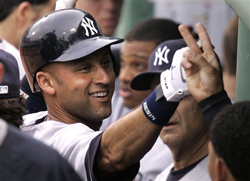 The Bronx kid who thwarted burglars threatening his family last week got to meet his own personal hero yesterday. When armed men burst into Edwin Alamo's home last week screaming for everyone to "Get the f– down!", the quick-thinking 12-year-old grabbed a cell phone, climbed out a second-story window, scrambled across a rooftop, and then hid in an abandoned building where he called the police. The burglars had a shootout with the cops shortly thereafter in which two were wounded and all three arrested.

The Daily News reports that George Steinbrenner was so impressed with Edwin's bravery that he invited him to Yankee Stadium to meet the team. Shouting armed burlars are one thing, coming face to face with Derek Jeter when one is a 12-year-old Yankee fan is another thing entirely.

"When he shook my hand, I got stuck for a minute and I didn't know what to say," the seventh-grader recalled. "I was so nervous I don't even know what he said to me."

It's a good thing a reporter was on hand to record the event. The News writes that Jeter said "Hi. I hear you're quite the hero. I'm pleased to meet you."