LIRR Etiquette Vigilante Back in Court 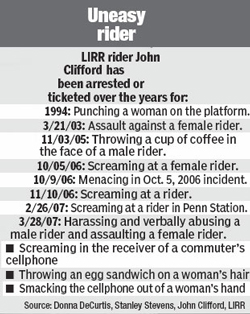 Long Island Rail Road etiquette enforcer John Clifford – famous for his crusade against rude behavior during his morning commute – was in court yesterday to face charges stemming from a train altercation in March 2007. The retired cop-turned-lawyer stands accused of, among other things, slapping a woman who dared intervene while Clifford berated another passenger for talking loudly on his cell phone.

Clifford’s been arrested or ticketed eight times for similar incidents, such as pouring coffee on the head of a woman after she spilled some on him, and throwing an egg sandwich – an incident he denies but which earned him the nickname "The Eggman" among fellow travelers. But he's never been convicted because no one’s ever showed up in court to testify against him – until now.

Lydia Klein testified yesterday that Clifford hit her hand when she tried to stand up for one Nicholas Bender, who was on the receiving end of Clifford’s invective for his loud cell phone chatting. Clifford insists Klein slapped him first when he tried to intercept the business card she was handing to Klein, but he fully admits calling Bender a “f--king faggot… I shouldn't have to put up with some 19-year-old nitwit waking up one girlfriend after another. I have as much right telling this guy he's being an a--hole as he has a right being one."

Whether Clifford has a right to his etiquette enforcement is for the judge to decide, but he’s clearly fed up with being pushed around. According to Newsday, last fall Clifford filed a $5 million lawsuit in State Supreme Court in Manhattan against the LIRR, MTA police, an LIRR brakeman, an MTA police detective and three fellow riders; he accuses them of “violating his First Amendment rights, defaming and libeling him, false imprisonment and malicious prosecution.”

#cell phone
#coffee
#court
#first amendment
#John Clifford
#lawsuit
#lirr
#MTA
Do you know the scoop? Comment below or Send us a Tip
A new Gothamist is coming! We’ve moved comments over to our beta site. Click here to join the conversation and get a preview of our new website.