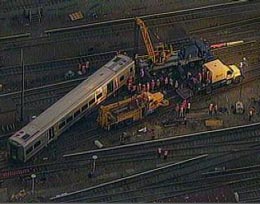 Long Island Rail Road riders will have to brace themselves for another day of screwed up service. Though MTA repair crews have been working nonstop since Sunday to fix damaged rails and switches after a train derailed just west of Jamaica Station-- forcing numerous cancellations during the morning and evening rush hours and delays (some riders' -- the damage is so extensive that there are also delays and cancelled service for today.

Newsday reports that LIRR President Helena Williams asked customers to hang on, "We have significant repair work to do. We are asking, again, for our customers to have patience. We know that that's a lot to ask our customers, but they are a good New York, sturdy breed." Newsday also described the extent of the damage:

The accident took place Sunday afternoon when the three rear cars of a 10-car train derailed - one of them jackknifing across three separate tracks and tearing up dirt and rubble in its path. The two rearmost cars needed to be cut apart at their coupling point with torches, and wooden blocks secured the jackknifed train at various points to keep it from tipping over. A crane was required to put the train back on track.

that federal investigators are also looking into the derailment, since it's the second incident at the station in days (two trains bumped last week) and third this year (a derailment in March).

The MTA explains that there are twelve cancelled westbound AM trains (see the list here), "As a result, there will be residual delays from added station stops and not all scheduled connections will be available at Jamaica Station to Penn Station, Flatbush Avenue-Brooklyn, Hunterspoint Avenue, and Long Island City. LIRR station personnel will be available at Jamaica to assist customers with service information. The modified plan also includes service changes for the eastbound AM Rush in particular 9 of the 15 eastbound reverse peak trains from Flatbush Avenue Brooklyn will be canceled."

#cancellation
#derailment
#lirr
#long island rail road
#train
#train service
Do you know the scoop? Comment below or Send us a Tip
A new Gothamist is coming! We’ve moved comments over to our beta site. Click here to join the conversation and get a preview of our new website.