Lime-A-Rita L Train Racist: I Was Race-Baiting But I'm Not Racist

The man caught on video this weekend shouting the n-word on a crowded L train said he's "not that sorry" about the incident because he was "making a point."

On Tuesday morning, Paul Lawson addressed the footage in a series of Facebook posts and comments, which he deleted hours later. Expressing a mixture of remorse and indignation, he initially wrote that he was "getting help and really don't know how it came up in the first place and if it makes you feel any better I had my head broke open the next day so there's that." 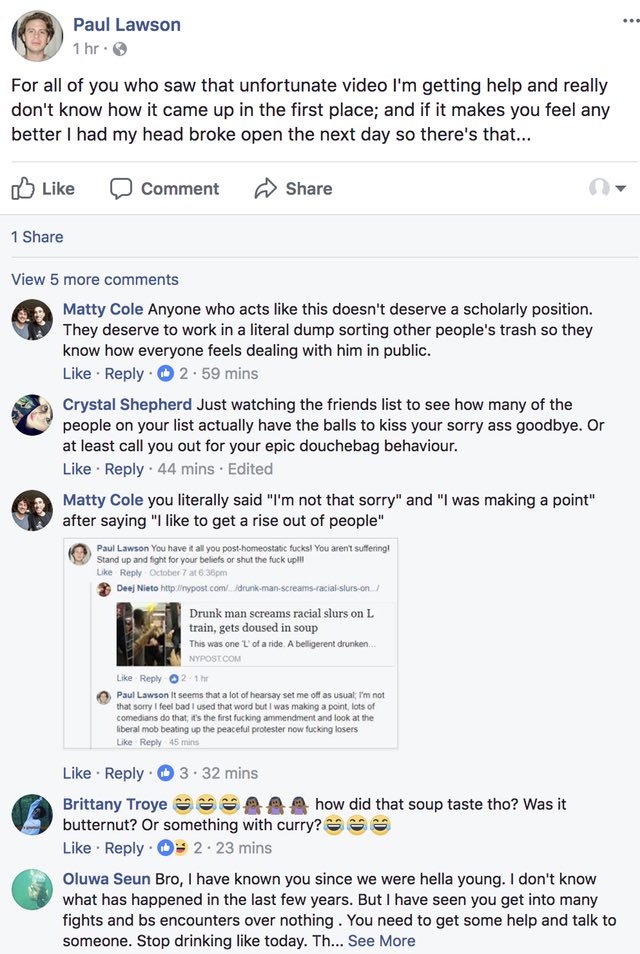 In response to criticism from several commenters, he added that he was "not that sorry I feel bad I used that word but I was making a point, lots of comedians do that; it's the first fucking ammendment and look at the liberal mob beating up the peaceful protester now fucking losers." In the video, Lawson can be heard shouting about the first amendment, and claiming to be a "legal scholar" and graduate of NYU Law School. He was subsequently forced off the train by straphangers, one of whom tossed a cup of soup on him.

In other Facebook responses, Lawson said that he was a "race-baiter in this context, not a racist," and that he "enjoys getting a rise out of people." He also noted that he was only drinking a Bud Light Lime-A-Rita because "it was free bro." 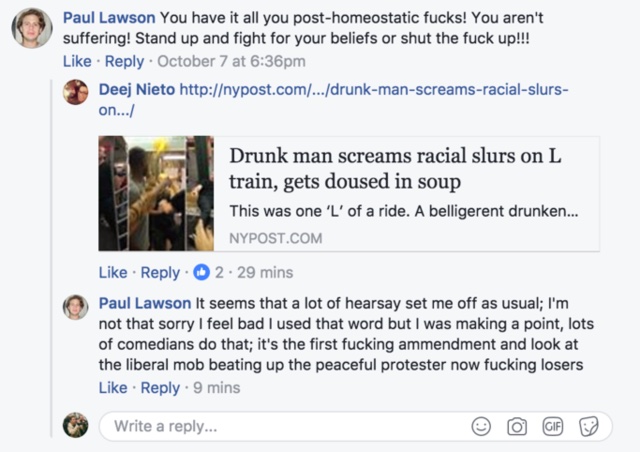 According to multiple people who reached out to us, it's not the first time that Lawson's offensive ranting has landed him in trouble. In a video posted to Twitter in May, he appears to once again taunt a black man, who then pushes him off at the station and punches him in the face.

Joe Fuller, who took the May video, says that Lawson had been berating the man for at least 20 minutes, referring to him as a n-gger and a f-ggot. "The black guy is like, 'You're yelling racist and hateful things at people, we don't do that in New York, that's just not what's going to happen,'" Fuller told Gothamist. "[Lawson] kept saying that black people shouldn't live in Bed-Stuy...so the guy pushes him off the train and he tries to come back—the same way in the other video—and the guy punches him in the face twice and the doors shut on him. Everyone clapped."

A different person acquainted with Lawson told us that "he thrives on confrontation, and although he will never take the first punch, he loves getting people to fight him." That source said that Lawson graduated from NYU, but not the law school. (NYU did not immediately respond to an inquiry about Lawson's relationship with the school, but we will update accordingly.)

"He was actually a normal human being at one point, who had a good, well paying job, but he degenerated into what you saw in the video after years of alcohol and drug abuse," the source said. "He's a skateboarder, and he's been knocked out, not unsurprisingly, many times. He often begs people to hit him."

Lawson has not responded to multiple requests for comment.

#bedford avenue
#lime-a-rita racist
#MTA
#paul lawson
#racist
#subway
#original
Do you know the scoop? Comment below or Send us a Tip