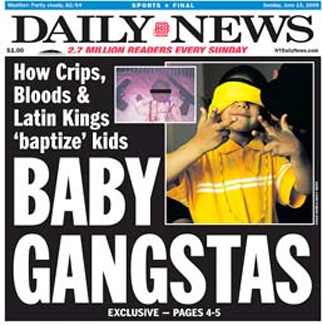 A is for Apple..B is for Blood and C is for Crip? The Daily News has a disturbing story about gang-member parents indoctrinating their children from birth in gang life. Before they can even speak, some of these tots can flash their signs and are adorned with gang colors and accouterments. Are gang-themed line of onesies far behind?

Blood parents call their offspring Blood drops, stains, or rims, which is just the cutest. One Latin King father described his son's blessing at St. Mary's Episcopal Church in Morningside Heights four years ago during a quasi-religious ceremony.

"It's like a christening," he said. "The priest holds the baby and we say our prayer at the same time. We have to have the window open and the baby pointed toward the sun."

Once blessed, the child is given yellow beads - the gang's color.

"He's a true gangster. The way he acts with people, the way he just wants to beat you up and punch you," Iron said of the 4-year-old "Latin Prince" he hopes will preach peace within the gang.

The first child Iron baptized, though, was killed in a drive-by at age 2; Iron says he was the target.

In a separate article, a 38-year-old mother of two describes how she also had her four children christened as Latin Kings and Latin Queens. As they became older, she started to reflect on her life of being subjected to beatings, shooting and slashing people, and being raped by Latin Kings, and then decided to flee the community. She is now a minister and hopes that her former gang life will never catch up with her, or her children.

And last year, Yankees caps with gang colors were pulled from the shelves.

#bloods
#child abuse
#christenings
#crips
#gangs
#kids
#latin kings
Do you know the scoop? Comment below or Send us a Tip
A new Gothamist is coming! We’ve moved comments over to our beta site. Click here to join the conversation and get a preview of our new website.