Like It Or Not, Ahmadinejad Is Coming To New York 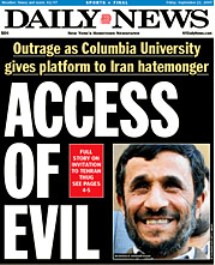 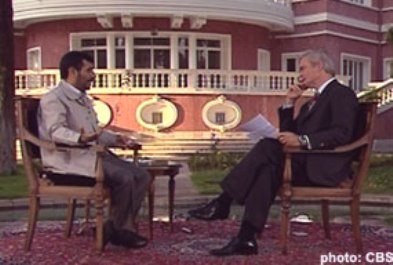 Iranian president Mahmoud Ahmadinejad's visit to New York is sure going to be a doozey. He may have decided not to visit Ground Zero anymore, but his appearance at Columbia University, to participate in a World Leaders Forum, has many people upset.

The Daily News takes on the story on the front cover again ("Access of Evil") and has an excoriating editorial: "By extending an invitation to Ahmadinejad, the leaders of Columbia's School of International and Public Affairs damaged the university's standing as a moral beacon and premier New York institution, insulted the Jewish community and spat on all those who are risking, and losing, their lives at war." The News also catalogs other instances when hateful speakers have been invited to Columbia, lumping Ahmadinejad with Minutemen Project founder Jim Gilchrist, ex-Palestine Liberation Organization terrorist Walid Shoebat, and Nazi ambassador Hans Luthe.

City Council Speaker Christine Quinn criticized Columbia as well, saying, ""The idea of Ahmadinejad as an honored guest anywhere in our city is offensive to all New Yorkers. He can say whatever he wants on any street corner, but should not be given center stage at one of New York's most prestigious centers of higher education." But Mayor Bloomberg said, "I think who Columbia invites is up to them and that's what academic institutions do."

Bloomberg did clarify his feelings for Ahmadinejad himself, when discussing the Iranian president's attempt to visit Ground Zero: "I find his views abhorrent, I think it would be an outrage if he were to go, and we do not expect him to go. Couldn't be more clear about it." Ahmadinejad himself seemed to play coy when asked about the controversy during a 60 Minutes interview (which will air on Sunday) with Scott Pelley.

PELLEY: Sir, what were you thinking? The World Trade Center site is the most sensitive place in the American heart, and you must have known that visiting there would be insulting to many, many Americans.

AHMADINEJAD: Why should it be insulting?

PELLEY: But the American people, sir, believe that your country is a terrorist nation, exporting terrorism in the world. You must have known that visiting the World Trade Center site would infuriate many Americans .

AHMADINEJAD: Well, I'm amazed. How can you speak for the whole of the American nation?

AHMADINEJAD: You are representing a media and you're a reporter. The American nation is made up of 300 million people. There are different points of view over there.

Ahmadinejad had said earlier that he would try to visit Ground Zero, with or without NYPD help, but now he says he will not insist on visiting.

Columbia president Lee Bollinger spent yesterday morning speaking with students about Ahmadinejad's visit. According to The Columbia Spectator, besides the usual concerns about the Iranian leader's views and how students would be involved in the discussion, the questions also included "why there was so little advance notice, what provisions had been made for protesters, if students not able to attend the event could ask questions, and how students could weigh in on future invitations to controversial leaders." Students are planning an on-campus protest rally on Monday.

And the Bwog has the scoop on how the Iranian leader's Columbia appearance was arranged: Professor Richard Bulliet got a call from the Iranian ambassador the U.N. who asked him to "convey a request for a renewal of the invitation." Bulliet said, "There was ample time to make arrangements. Columbia responded positively."