Life Without Internet In NYC

If Tyrone Youmans, 46, a chef from Queens, wants to read this article, he has a couple options. None are ideal.

He can travel 15 minutes from his apartment to his local library branch and log on to a desktop computer for up to 30 minutes. If it’s crowded, he’ll have to wait until one becomes available, and log off as soon as his session is over to make way for another patron.

If the library’s closed, he can travel more than an hour to use his girlfriend’s computer in Far Rockaway, or his sister’s in Flatbush. Or, he can use up some precious data from his monthly two gigabyte mobile data plan.

Youmans’ best bet, for now, is to use a computer after his class at The HOPE Program, where he’s enrolled in an eight-week work readiness training.

Having a computer of his own and broadband access at home would make this, and a host of other daily tasks, a lot easier.

“I’d get things done quicker. I’d be more relaxed. I’d save time running from this place to that place. It would help a lot,” he said.

But for Youmans, and millions of New Yorkers, that simply isn’t feasible. According to a 2014 report [PDF] by the City Comptroller’s office, 26% of New Yorkers were without broadband access at home, and 16% were without a computer. In a digitally connected city, that adds extra hardship at virtually every turn, from securing employment to pursuing an education to finding housing — even as many have mobile data plans and more ways to get online for free in public spaces than ever before. 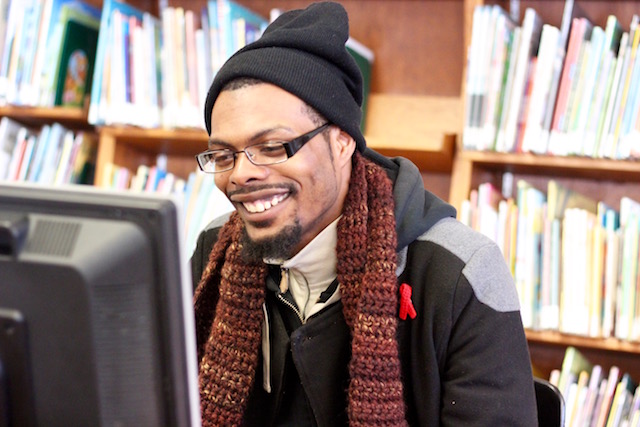 During the de Blasio administration, the city has taken several steps to expand Internet accessibility. In July, the mayor announced a $10 million initiative to bring free broadband access to 16,000 New Yorkers in five public housing developments across three boroughs, and in February, he added two more housing developments to the plan. He’s also made a $70 million dollar commitment over the next 10 years towards free or low-cost wireless service for low-income communities.

Perhaps the most visible city initiative to bridge the digital divide is LinkNYC, a measure that will bring 7,500 kiosks equipped with free ultra high-speed Wi-Fi to the five boroughs over the next few years; at least 510 kiosks are expected to be installed by July.

Still, the Comptroller’s office reports that between 2013 and 2014 — the most recent data sets available — while the percentage of New York households without broadband remained virtually static, neighborhoods in the South Bronx and Central and Eastern Brooklyn, already among the least connected in the city, saw drops in household broadband access.

“While there have been great advances in mobile technology, to truly harness the power of the Internet, in-home broadband access is vital. We need to make sure that the opportunities provided by the Internet are within reach of every New Yorker,” Comptroller Scott Stringer said in a statement to Gothamist.

According to the Pew Research Center, seven percent of U.S. smartphone owners — a sizable portion of which are young adults, minorities or those with low incomes— are largely dependent on their phones for Internet access.

Scott Joyner, a 28-year-old Family Dollar manager from Brownsville, is among that group. Since his computer stopped working five years ago and he cancelled his AOL dial-up subscription, he’s used his unlimited LTE data plan on his iPhone for most daily online tasks. But the iPhone can’t do everything, he says, so he makes the 30-minute commute to the Saratoga branch of the Brooklyn Public Library about four times a week, sometimes with his 8-year-old son, Rhys, who needs computer access to complete some school assignments.

Last year, a bakery with an open manager position contacted Joyner around 8 p.m. requesting he send his resume that evening. Joyner had an outdated version of the document on his phone, but since the library was already closed, he couldn’t get to a computer to make changes to it on Microsoft Word until the next day.

“Unfortunately, I didn’t get that job,” Joyner said.

For some of the city’s most vulnerable communities, home broadband access remains elusive. In 2013 and 2014, the 15th congressional district in the Bronx had the highest percentage of households without broadband citywide. At last count, in 2014, 38 percent of families in the district were living below the poverty level. 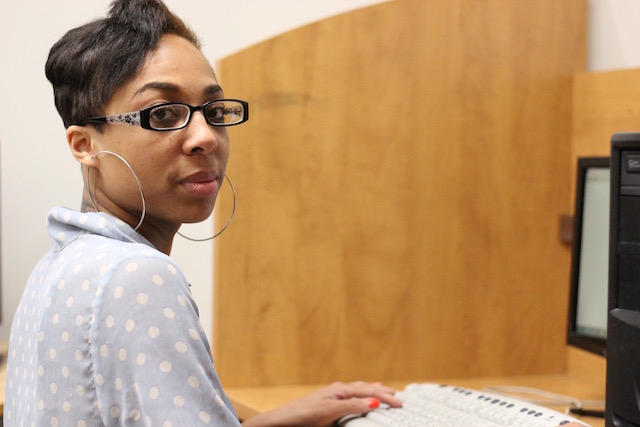 Terri Bizzell at SoBRO in the Bronx, where she’s enrolled in a customer service training program (Jordan G. Teicher / Gothamist)

“Broadband access has become crucial for economic, academic, and professional success and unfortunately the digital divide affects communities like the South Bronx, including thousands of my constituents, the most.”

For some, like Terri Bizzell, 21, mobile Internet access is almost entirely sufficient. Bizzell works at Bed Bath & Beyond in Manhattan and the overnight shift at Forever 21 near the apartment she shares in the Bronx with her older brother. She says she’s online on her iPhone 4 “always, everyday,” and never misses a beat on Facebook, Snapchat or Instagram. Sometimes, she wishes she could simply “roll out of bed and go on a computer” but until she has enough money saved to purchase a laptop, she says, she can make do.

For others, life with infrequent Internet access can be alienating. Jill Safioti, 51, who’s enrolled in a residential treatment program in the Bronx, hasn’t had a computer of her own in eight years, and today, her mobile data plan is limited.

In some ways, Safioti has adjusted to life offline. She reads the news in free daily papers, pays all her bills by check “the old fashioned way,” and looks for jobs in the classifieds. 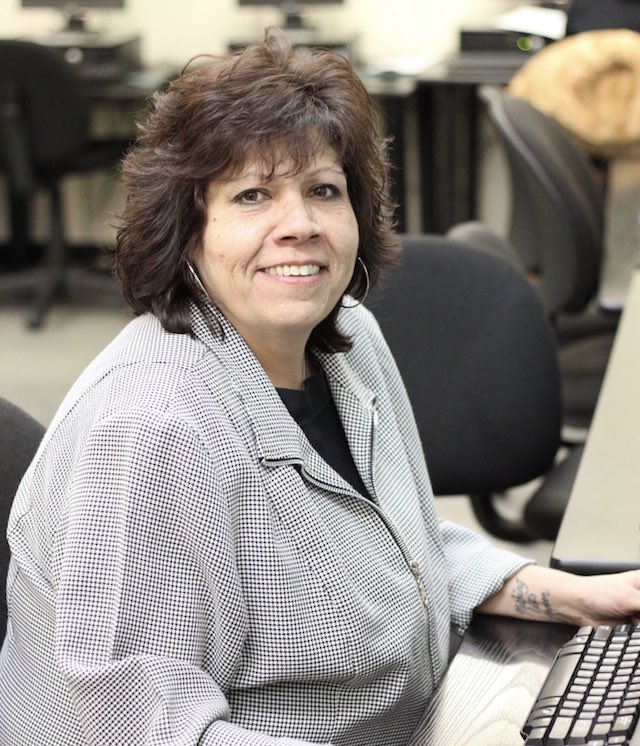 Jill Safioti, who lives in the Bronx, uses a computer at The HOPE Program in Brooklyn (Jordan G. Teicher / Gothamist)

But Safioti says she finds that in the last eight years, the world has changed in ways that make it hard for people like her to keep up. It’s become more difficult, she said, to access customer service and order things over the phone. Without a Facebook account, staying in touch with friends is a challenge.

And she misses out on cultural references that are social currency among the broadband-connected. Once she’s out of treatment and into an apartment of her own, she said, getting back online will be an early priority.

“It’s gonna be like TV, computer…” she said, listing the first purchases she’ll make. “Chair,” she added, almost as an afterthought.

Jordan G. Teicher is a freelance journalist based in New York City. He's been published by Slate, NPR and Wired, among other publications.

#internet access
#linknyc
#longform
#original
Do you know the scoop? Comment below or Send us a Tip
A new Gothamist is coming! We’ve moved comments over to our beta site. Click here to join the conversation and get a preview of our new website.