The nice thing about New Kings Democrats' thoroughly anti-Vito Lopez-for-city-council campaign is that one need not know a single thing about Vito Lopez, his politics, or the history of his allegedly icky gropey hands to appreciate the message: Molesters do NOT belong on city council, guys. You don't even have to know how to read! The flier above all but wordlessly summarizes the progressive organization's sentiments toward Lopez, who yesterday registered a campaign account to run for city council, despite "battling thyroid cancer and two new growths on his brain," as well as Creepy Old Man Syndrome. 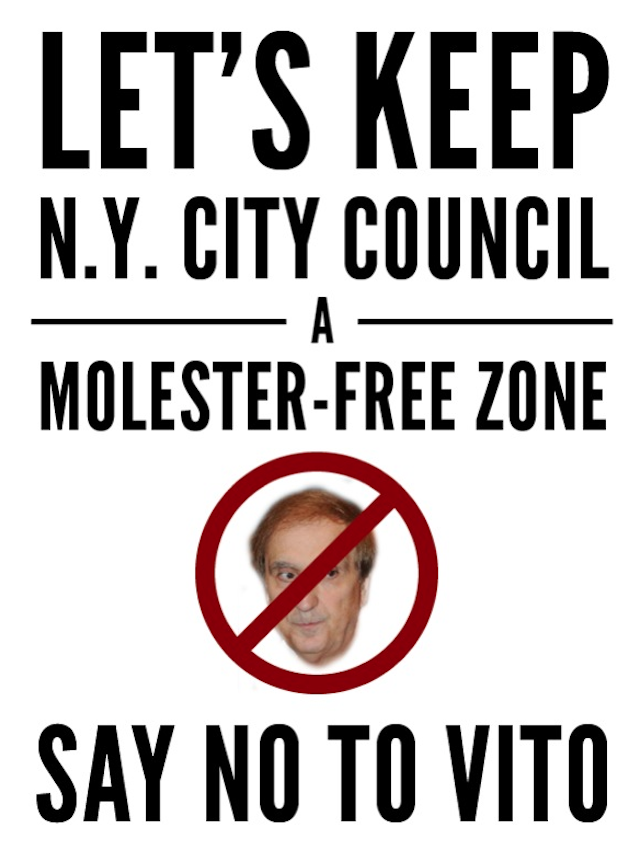 NKD co-founder Lincoln Restler and noted Lopez-hater said the flier took between "60 and 250 seconds" to make, noting the urgency of "building widespread awareness that there is a sexual predator seeking public office."

"I think we were more than a little shocked that Vito Lopez would have chutzpah to pursue a run for city council," Restler told us. "There is no way that a single tax dollar should go toward this disgraced pervert." The National Organization for Women agrees, having also voiced its disgust at the idea of Lewdy Lopez sitting on the city council. "It is insulting and obscene that he would even consider running," Sonia Ossorio, the group's president, told reporters yesterday.

The fliers, which Restler said are being plastered around Bushwick today, are only the tip of the anti-Vito iceberg. He said more fliers are on the way—and if you have any ideas for compelling images or witty slogans, shoot NKD a message with your suggestions. A forthcoming report from JCOPE should contain plenty of horrifying material to work with—that is, assuming it ever gets published.

#City Council
#Lincoln Restler
#new kings democrats
#vito lopez
Do you know the scoop? Comment below or Send us a Tip