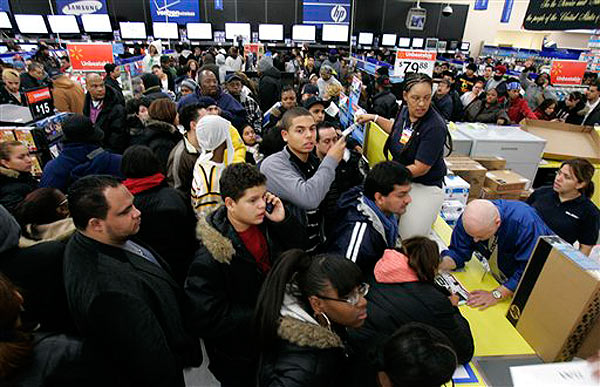 Photograph of a Secaucus, NJ Wal-Mart earlier this morning by Mike Derer/AP

This morning, shoppers apparently broke down the doors of a Valley Stream Wal-Mart, and, in the process, trampled a Wal-Mart greeter to death around 5 a.m. The Nassau County police tell Newsday the store was a "mob scene" and that the worker was a temporary, part-time employee. One witness, Kimberly Cribbs of Far Rockaway, said that other Wal-Mart employees (some of whom were crying) asked shoppers to leave:

Though rumors circulated among the shoppers that someone had been badly injured, people ignored the Wal-Mart workers' requests that they stop shopping, move to the front of the store and exit, Cribbs said.

"They kept shopping. It's not right. They're savages," Cribbs said.

She said she entered the store after the worker was already being attended to by emergency personnel. As people waited, then pushed into the store, she said, "It was chaos."

A Wal-Mart employee, Jimmy Overby, told the Daily News, "He was bum-rushed by 200 people. They took the doors off the hinges. He was trampled and killed in front of me. They took me down too...I literally had to fight people off my back."

The Post reports that four other people--including a pregnant woman who was knocked to the floor--were taken to the hospital.