On Christmas Eve, a Long Island woman and her son made a startling discovery in their Central Islip home: Inside another son's room were the murdered remains of his friend. Suffolk County police arrested Aston Barth, 33, for killing Jason Campbell, 35.

Apparently Barth strangled Campbell on December 18—and unsuccessfully tried to decapitate him—and put the body in his closet. Suffolk County Assistant District Attorney Glenn Kurtzrock told Newsday, "He was acting strange and said, 'Don't go into my room'" to his relatives.

Apparently Barth and Campbell argued, leading Barth to strike out. Kurtzrock told Newsday, "He said he struck him once in the neck with an ax and then decided not to do it, or realized he couldn't do it. We still have not determined whether the strike to the neck was before or after death."

Barth had wrapped Campbell's head with a garbage bag and the rest of the body with a blanket. Kurtzrock also said that Barth told cops that he didn't want to get the death penalty, but when they said NY State doesn't have the death penalty, Barth confessed. 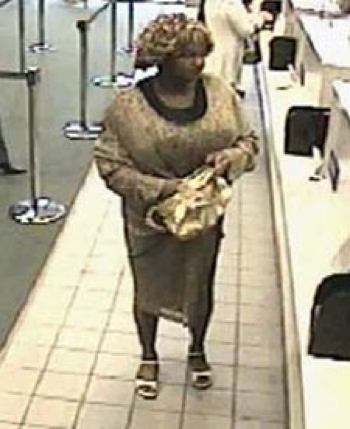 Other friends of Barth's and Campbell's went to Barth's house after Campbell disappeared. One said that they were in Barth's bedroom, not realizing Campbell's body was there, "[Barth] said 'I haven't seen him. It's crazy that he's missing.'"

Barth has previously been convicted of robbery three times, most recently in 2007 for robbing a Citibank in Central Islip while "wearing a brown skirt suit, blond wig, open-toe sandals and makeup." However, Barth did not shave his mustache (surveillance image at left). He managed to take thousands of dollars, but was later caught, served three years and had just completed parole this year.

His mother told reporters yesterday, "I'm so sorry. My son should have some treatment. My son needed medication but he wouldn't take it."