A Suffolk County police officer forced a woman in custody to perform oral sex on him, federal prosecutors said. Suffolk County Police Commissioner Timothy Sini told reporters, "Look, this is disgusting. This is rape. We’re not going to tolerate this, obviously."

Christopher McCoy, 28, was charged with depriving an arrestee of the right to bodily integrity. The victim had been arrested on March 16th, 2017 by McCoy and his partner because she had "several open warrants in connection with pending vehicle and traffic offenses," according to the criminal complaint, which said that McCoy took her to a room after arrest processing.

An FBI agent who interviewed the victim said in the complaint that McCoy "pressed himself against her, unzipped his pants, removed his penis and asked her to kiss his penis. [The victim] refused, at which pointed McCoy took her hand and put her hand on his penis." After forcing her to kiss his penis again and asking her to perform oral sex, McCoy allegedly held down her head and, per the complaint, "pushed his penis into her mouth. At that point, someone walked by the door to the room and defendant McCoy quickly zipped up his pants and took her out of the room."

Later in the day, when the victim was taken back into the same room with McCoy and his partner, the complaint notes that when the partner left the room, "McCoy removed his penis, grabbed her by the jaw, pushed her down and said, in sum and substance, 'let's go, don't make this hard,'" before forcing his penis into her mouth. McCoy then allegedly ejaculated into her mouth. "Some of the ejaculate fell from her mouth onto her shirt."

The victim, referred to as Jane Doe in the complaint, immediately reported the incident to the FBI—not Suffolk County police, reportedly out of fear they would do nothing . . or worse, retaliate against her"—and then, less than two weeks later, prosecutors say McCoy texted the victim, writing, "You gave me your number so we can meet up some time." Initially unsure of who was texting her, the victim subsequently stopped texting with him when she determined who it was. She also ignored a text he sent her the following day, according to the complaint. 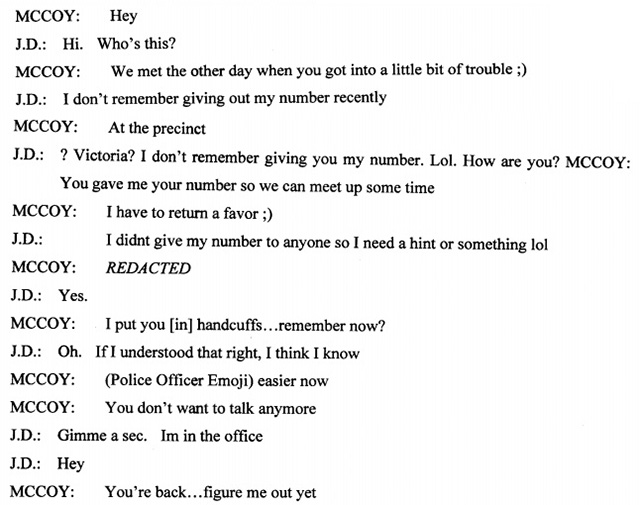 From the criminal complaint against McCoy

In April, when FBI agents interviewed McCoy about the incident, prosecutors say that he denied sexual contact with the victim—but later said he had oral sex with her when the agents told him they were there to take a DNA sample from his cheek. The DNA matched the DNA on the victim's shirt, according to the complaint.

"While in custody, this woman didn’t deserve to be allegedly abused and degraded by a sworn public servant," stated William Sweeney, FBI Assistant Director-in-Charge of the NY field office. "Police officers are held to a high standard, as they should be, and they certainly don’t have the authority to disrespect any human being. This type of conduct threatens the reputation of the vast majority of law enforcement officials who serve each day with honor and integrity."

The victim, 31, is suing the Suffolk County Police Department for $40 million. According to Newsday, "The woman said in her suit that McCoy and a partner in a patrol car stopped a car in which she was a passenger. She said McCoy told her she had outstanding warrants for vehicle and traffic violations, but she said she told him she had court documents showing the warrants had been addressed."