On a cloudy Saturday in late May, several hundred activists gathered on the Riegelmann Boardwalk in Brighton Beach to send a message to their neighbors in the Russian-speaking community: we’re here, we’re queer, and we’re not going anywhere.

Nestled on Brooklyn’s southern shore, Brighton Beach, a.k.a. “Little Odessa,” has served as a sort of pit-stop for migrants from the former Soviet Union for decades. Although the neighborhood’s nickname was earned after a new wave of former Soviet migrants settled in the area starting in the 1970s, the demographics of newcomers have changed over time.

With nearly 70 percent of the population born abroad, Eastern European culture runs deep. “There is a borough in New York where we can go because we’ll be in Russia again,” noted Elvira Brodskaya, a lesbian originally from St. Petersburg. But that familiarity can be a double-edged sword. Here, on the southern shores of Brooklyn, bliny, pelmeni, and borscht can be found in abundance, but so can some of the region’s more conservative and repressive attitudes.

The march was led by RUSA-LGBT, an activist organization founded by Yelena Goltsman in 2008, which has carved out a niche for itself as being one of the few Russian-speaking LGBTQ-advocacy groups in the United States catering to emigres from the former Soviet Union, and its members are as diverse as the former Soviet region itself. Here, Azerbaijanis, Ukrainians, Georgians, Uzbeks, Russians, and numerous other nationalities are united through their shared language and their common cause: human rights for all.

Goltsman credits RUSA-LGBT co-president Lyosha Gorshkov as being the driving force behind Brighton Beach Pride. Gorshkov—a former professor at Perm State University in the Urals—cited both Trump’s election and exasperation with the rampant homophobia in Russian-speaking enclaves in Sheepshead Bay, Brighton Beach, and Kings Highway. Despite coming to the United States in July 2014 in an effort to flee anti-gay persecution, he and other LGBTQ Russian-speaking residents say verbal and physical abuse continue to be very real problems here in Brooklyn.

“I got angry, thinking, we had managed to escape from homophobia in our countries, and we were still unsafe in those Russian-speaking areas in NYC,” Gorshkov said. “It was a flashback to the Soviet Union... You cannot believe how many times I have heard [the] ‘f’ word here.” 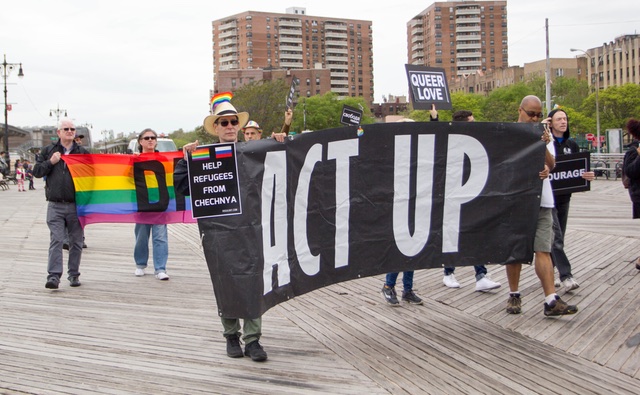 It was clear from the beginning that, while RUSA-LGBT has had a strong presence at the main New York Pride march for years, Brighton Beach is not Manhattan. Safety was an obvious concern, and the small phalanx of NYPD officers that greeted me as I walked from the Q train stop at Ocean Parkway remained a constant presence as we wandered down the boardwalk. Although the event took place largely without a hitch, some onlookers weren’t necessarily friendly observers. RTVi, a Russian-language television network, spoke to one bystander who openly advocated for castration; another asserted the event was an “embarrassment.”

At the rally, journalist Masha Gessen praised the participants for proudly marching in the face of such intimidation. “Pride is political," Gessen said. "Pride is about going into a place where it can be frightening, where not everyone has come to see LGBTQ people as human beings. But it’s also what solidarity looks like."

The neighborhood’s first Russian-speaking pride parade comes at a contentious time for both American and Russian politics—Brighton Beach was one of the few New York City districts to swing heavily for Trump. In addition the smattering of “No Trump / No KKK” and “Drive Out the Pence/Trump Regime” signs that have become staples at nearly any left-of-center protest in the Trump era, marchers made a point of portraying the two officials as cut from a similar cloth. One chant, in a nod to Brighton’s political proclivities, pronounced: “Brighton-Brighton, we love you! Trump and Putin—bad for you!”

Gorshkov sees a direct connection between support for Trump and Russian President Vladimir Putin. “I was not surprised though that Brighton Beach voted for [Trump],” he noted, “as many people living there are attracted to Putin even though they never lived a minute under the Putin’s regime.” Many of the Pride marchers, including Gorshkov and several speakers, are recent recipients of asylum status, while many of their older neighbors have been living in the U.S. for decades.

In addition to targeting Putin, the Brighton Beach march called attention to the ongoing, government-sponsored extermination of the gay community in Chechnya, Russia’s tumultuous semi-autonomous southern republic. In early April, Novaya Gazeta—a Russian newspaper known for its investigative work—reported that nearly 100 men had been detained “in connection with their nontraditional sexual orientation, or suspicion of such.” Chechen leader Ramzan Kadyrov has since denied these allegations, and one of his spokesmen even went so far as to assert that such reports were preposterous because sexual minorities “just don’t exist in the republic.”

As the rally came to a close and participants drifted off, some leisurely wandering to a LGBTQ-friendly cafe up the street, I caught up with Goltsman. “This is what pride looks like. This is what we need,” she said, shortly after a Kazakh drag queen said her goodbyes. “We need to be political here.”

Hannah Gais is a writer based in New York with recent bylines in The Baffler, Pacific Standard, LobeLog, and more.