Following two separate attacks on a gay man and a transgender woman in less than a week, about 60 people, including LGBTQ activists and allies, gathered in Jackson Heights, Queens, late Tuesday afternoon to stand against the recent homophobic and transphobic violence in the community.

The rally at the Manuel De Dios Unanue Triangle demanded justice for all—but particularly for 25-year-old elementary-school teacher Brandon Soriano, who was beaten on his way home from the Queens Pride Parade in Jackson Heights around 10 p.m. on June 3rd. Soriano told CBS 2 the assailants attacked him without provocation, yelling anti-gay slurs and knocking him unconscious.

An NYPD spokesperson confirmed the assault, which occurred at the corner of 37th Avenue and 84th Street. No arrests have been made and the investigation is ongoing. “Getting your butt kicked for the same reason you went to pride, just crazy,” Soriano told CBS 2.

Five days later and a few blocks away from where Soriano was beaten, a Latina transgender woman was allegedly stabbed repeatedly by a man on 82nd Street, according to the New York Transgender Advocacy Group.

Make The Road LGBTQ organizer Bianey García-D la O tweeted last Friday that the transgender victim did not report her assault to the police out of fear she'd be arrested for being an undocumented sex worker. When asked about the woman’s condition, she said the victim did not want to be contacted by the press, and that she did not go to the hospital after the attack. An NYPD spokesman confirmed there was no police report filed.

“Trans Power” chanted García-D la O, asking the crowd to join in with her as the rally started. "Will I be the next victim?" and "We are the cry of the women who are no longer here" read some of the posters attendees, such as activist Liaam Winslet, lifted into the sky. 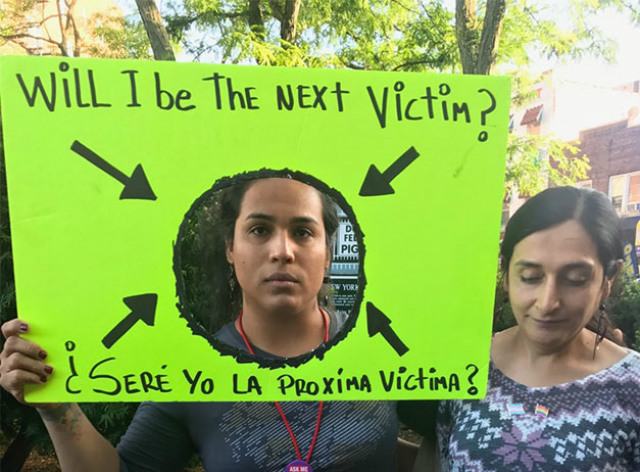 Jackson Heights resident Graciela Ortiz, 39, said she was shocked by the recent incidents. “You can’t even go get food now in days. You get attacked,” Ortiz said. “All of this violence just has to stop.”

Another longtime Jackson Heights resident, Irene Chaldaris, said she feels afraid to hold hands with her girlfriend. “I used to feel very safe in this neighborhood and I don’t anymore,” Chaldaris said.

As the 7 train rumbled above, speakers lifted their voices higher. Activist Daniel Puerto requested a moment of silence for the 49 people killed in Orlando two years ago at the gay nightclub Pulse.

There were 52 reports of hate-violence homicides of LGBTQ victims nationally in 2017, according to a report by The National Coalition of Anti-Violence Programs. That marks an 86 percent increase in single-incident, anti-LGBTQ homicides in 2017 compared to 2016, where 28 incidents were reported.

The number of assaults motivated by victims' sexual orientation has increased so far this year in NYC. According to the NYPD, 26 such assaults have already been reported this year, compared to 18 reported in all of 2017. An alarming 169 total hate crime incidents were reported in the city last year.

For Translatina Network founder Cristina Herrera, hate crimes against the LGBTQ in Jackson Heights did not come as a surprise. “I had lived in Jackson Heights for 30 years and this is a reality that the community has lived through since the '80s. This isn’t anything new,” Herrera said in Spanish.

Hate crime survivor Daniela Marroquin spoke about the importance of her peers lifting their voices and speaking about their experiences at the rally as well. She said that in August of last year she was on her way to grab a coffee in Harlem when a transphobic individual attacked her. She said she filed a report and the perpetrator was arrested.

“We have to talk,” said Marroquin in Spanish. “We have a voice. We have the power. We demand justice.”

#assault
#hate crime
#jackson heights
#Justice
#LGBTQ
#Translivesmatter
#Transphobia
#original
Do you know the scoop? Comment below or Send us a Tip