Now the dirty laundry of Robert "Joe" Halderman, the 48 Hours news producer who is accused of trying to shake down David Letterman for $2 million, is being spilled. While Halderman allegedly threatened to expose Letterman's various sexual relationships with staffers, a former co-worker told the Daily News that Halderman "was a charmer and he was very flirty...But he was definitely a troublemaker, the kind of man [that] women go after because he's trouble." 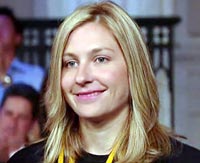 Halderman, who pleaded not guilty to attempted grand larceny in the first degree and is now free on $200,000 bail, was described as being "desperate" and "deep in debt"—his child/spousal support payments were around $6000-7000/month on a roughly $214,000 salary. While he's described as a terrific news producer, one colleague told the Observer, "His personality is one that pushes the envelope. As a breaking news producer that's what you need, but you could see how he would be living on the edge a bit." But Dan Rather told the Daily Beast, "Frankly, I couldn’t be more astonished that this guy was involved in something like this than if you came riding through my apartment on a hippopotamus."

Halderman was up until recently living with Stephanie Birkitt, a Late Show intern-turned-assistant who apparently had a relationship with Letterman. Sources tell the Post that Halderman stumbled onto Birkitt's diary with "steamy reminiscences" of her relationship with Letterman, and "got his hands on salacious e-mails between Birkitt and Letterman, as well as some photographs that showed them together." The source said, "He recognized a payday. He saw this as his retirement. He just didn't want to work anymore." His break-up with Birkitt also meant she wasn't helping pay rent.

From these materials, Halderman allegedly crafted a TV treatment, which he placed in Letterman's limousine with the demand for $2 million. Letterman and his personal lawyer agreed to meet Halderman once, but then contacted to the Manhattan DA's office for help. Eventually, Letterman's lawyer gave Halderman a $2 million check that was designed to bounce and after the check was deposited, he was arrested.

Letterman's production company Worldwide Pants said the talk show host's sexual relationships with staffers ended before he married the mother of his young child earlier this year. Worldwide Pants was also quick to point out: "Dave is not in violation of our policy and no one has ever raised a complaint against him." But some CBS executives are concerned and civil rights lawyer Debra S. Katz tells the NY Times, "CBS is definitely going to have to speak with him and find out who he had relationships with. They’re going to have to reach back and see if these women think that the relationships were welcome."

And Jay Leno poked fun as his one-time rival, offering up, "This guy who was trying to blackmail Letterman was a producer from the show ‘48 Hours.’ It could’ve been worse, at least it wasn’t a producer from ‘To Catch a Predator,'" "If you came here for sex with a talk show host, you came to the wrong place," and "I was once the victim of a plot. How do you think I wound up at 10 p.m.?" The Post reports that Jimmy Fallon joked, "There's a new book out called 'Why Women Have Sex' that says there are 237 reasons why women have sex. And folks, Letterman knows the top 10." But Conan O'Brien didn't mention it at all and when Drew Carey brought it up, he said, "No comment."