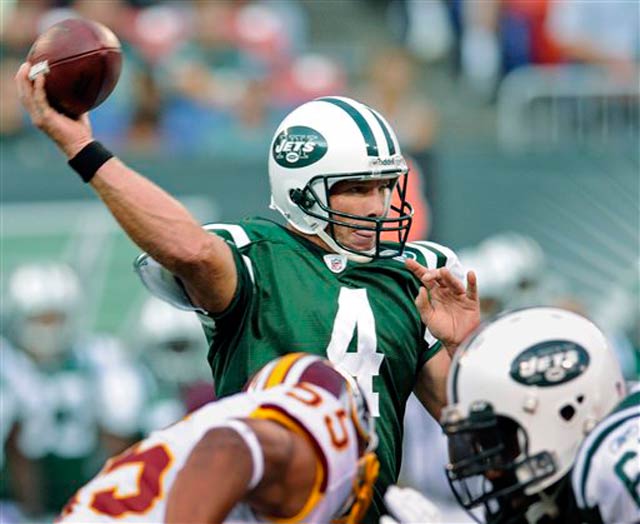 With the Jets in Miami to start their 2008 season, Brett Favre is ready to play football again. After retiring and unretiring -- and reportedly turning down $20 million from the Packers to stay inactive -- Favre forced a trade to the Jets. The Packers legend will face a new test in the green and white of the Jets, but just how stiff will his challenge be? The Jets were 4-12 last season, but seven of their losses came by eight points of fewer. Then again, just two of their wins came against teams other than the Dolphins, who went 1-15 in their worst season in franchise history.

The Jets' bright spots last season were a capable defense and the emergence of Jerricho Cotchery as a top-flight receiver. Whether he took advantage of attention paid to fellow wideout Laveranues Coles or simply broke out as a player, Cotchery finished with 1,130 receiving yards. The Jets ground game was capable -- but nothing more -- with Thomas Jones and Leon Washington in the backfield. Jones managed to score only one touchdown despite rushing for more than 1,119 yards. He and the rest of the offense will welcome Alan Faneca, a likely future Hall of Fame guard, to the offensive line.

For Favre, the big question is if last year was a fluke. In the two years before one of the best seasons in his career, Favre had demonstrated an affinity for interceptions rarely matched in professional football. There is zero chance Favre repeats his 4,155-yard, 28-touchdown performance of last season. The supporting cast on the Jets isn't as good as Green Bay's, and, even if Favre still called Wisconsin home, he would be due for some serious regression to the mean. He'll still get to enjoy his first game as a Jet, however. The Dolphins -- even with former Jet Chad Pennington -- aren't good enough to beat the Jets, and New York has won 16 of the last 20 in the series.

#Alan Faneca
#brett favre
#Jerricho Cotchery
#jets
#Laveranues Coles
#sports
Do you know the scoop? Comment below or Send us a Tip
A new Gothamist is coming! We’ve moved comments over to our beta site. Click here to join the conversation and get a preview of our new website.