If you've thus far missed our extensive coverage of four-day-old Citi Bike's many ups, downs, perils, pitfalls, trials and tribulations, here's a recap: some people just love to whine about it, and everyone else just loves to talk about people whining about it. But one Congressman from the venerable bike-loving city of Portland, Oregon can't understand why anyone would view Citi Bike as an apocalyptic demon out to swallow pedestrians and parking spots whole, and he penned a Daily News editorial urging us to shut up and appreciate bike-share, goddammit, because it's going to change the world, and YOU GUYS DON'T UNDERSTAND HOW GOOD YOU'VE GOT IT.

Earl Blumenauer, who represents Oregon's third district in the House of Representatives, urged New Yorkers to support Citi Bike in the editorial, presumptuously titled "Why New Yorkers will love bike share." According to Blumenauer, Citi Bike represents a transformative moment in United States history, as the country's largest-scale attempt to turn cycling mainstream. He paints a picture of a city void of car traffic and rife with cyclists, in which even the subway is reduced to primitive transport. "In a city where transportation can be maddeningly slow, even compared to horse and buggies a century and a half ago, bike sharing adds a fascinating new dimension and possible revolution for New York’s traffic woes," Blumenauer writes. "In many instances, bike transportation will prove faster than subway trips, and certainly more so than the rush hour crawl on the streets with passenger cars and taxis."

Blumenauer, a long-time supporter of eco-friendly transportation, sees Citi Bike as the country's first big step away from car culture. He expects other cities, like his native Portland and Chicago, to follow in our footsteps, though it's unclear if those bike share programs will fall victim to tabloid smear campaigns, too (they probably will). Meanwhile, Blumenauer's not the only one thrown off by all the anti-Citi Bike rage; cities overseas, a number of whom embraced cycling long ago, have apparently been getting a good laugh out of our bike share saga. 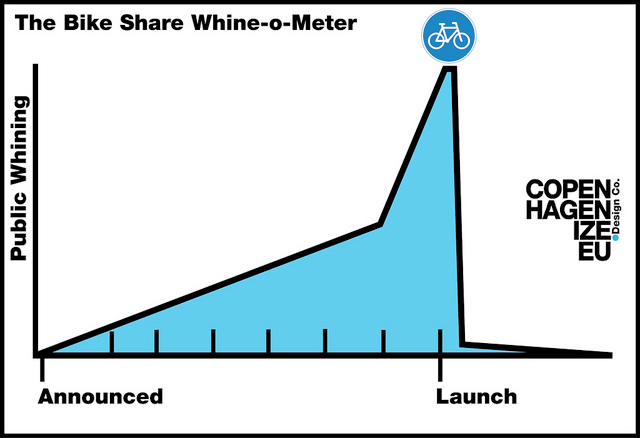 European bike-share enthusiast Ed Freyfogle tweeted earlier this week that it was "[a]musing to see the comments of all the New Yorkers as they discover cycle hire 3 years after London," and Copenhagen's "bike-share ambassador," Mikael Colville-Andersen, made this handy graph documenting all the public whining we've done since the program was announced. So, in short, New Yorkers are public embarrassments and need to stop pooping all over Citi Bike, both literally and figuratively, before we're destroyed in a black haze of smog and smug European criticism.