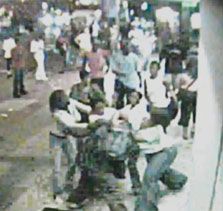 Two of the women involved the infamous lesbian catcall beatdown of Aught Six may get out of jail soon, the Times reports. A four-judge appeals court yesterday overturned the convictions of Terrain Dandridge and Renita Hill, who are currently doing time on assault charges after they attacked a man who they say tried to woo them outside the Greenwich Village IFC Center with come-ons like “I’ll fu-k you straight.”

The appeals court overturned Dandridge’s gang assault conviction because of “insufficient evidence,” and declared that Hill’s conviction was invalid because the “judge’s instructions to the jury on the charge were erroneous.” (Hill could be retried on that charge.)

Two other women involved in the melee – during which the crass Casanova was stabbed, punched and kicked – have also filed appeals. As for the victim, underground filmmaker Dwayne Buckle, he's been busy working on a documentary about hate crimes committed against straight men.

#assault
#beat up
#convicted
#fight
#lesbian
#overturn
#village
Do you know the scoop? Comment below or Send us a Tip