On a chilly morning in early April, Lower East Siders stood outside 45 Rivington Street to protest the red brick building's impending conversion from a nursing home into 100 luxury condominium units. City, state and federal investigators have since launched probes into the deal. Mayor de Blasio has denied repeatedly that he was aware of his office lifting a protective deed restriction on the building, and his press team has stated that no more deeds will be altered until the city's procedures are straightened out.

But gathering across the street from 45 Rivington on Monday, neighbors, elected officials, and former Rivington House patients said they're still waiting for any indication that the Mayor will step in and reverse the deed lift, re-establishing 45 Rivington Street as a healthcare facility in perpetuity.

"We want the place back," said Tessa Huxley, president of coop adjacent to Rivington House, where she's lived since 1981. "I don't need anyone to be punished, just give us back our facility. It's been a complete, deafening silence from the mayor."

The 118-year-old, 200-bed building on the corner of Forsyth Street served first as a public school, and then, for decades, as a nursing home for AIDS patients. Locals say that while there may be fewer AIDS patients now than there were in the '80s and '90s, the need for local nursing homes is acute.

"The only way people can keep a grasp on their community is to still live in it when they are older," Huxley added.

Last fall, the Department of Citywide Administrative Services (DCAS) lifted a deed restriction on 45 Rivington that would have required it remain a nonprofit residential healthcare facility "in perpetuity." In exchange, the building's then-owners, a for-profit nursing home provider called Allure Group, paid the city $16.15 million. In March, China Vanke Co., the largest real estate developer in China, closed a $116 million deal on the property with Slate Property Group and Adam America Real Estate.

"We had protections in place, and look at where we are," said James Rodriguez of the local housing preservation nonprofit Good Old Lower East Side on Monday. "It really speaks to the state of development in this neighborhood…. We're really beset on all sides here."

"We need common space where the most vulnerable can be safe and actually be cared for when their families can't care for them themselves," added Michael, whose father lived at Rivington House for 8 years until his death in 2009 (Michael asked that his last name be withheld because his father was not public about his HIV diagnosis). "Rivington House was a monument to compassion. Now we're going to give it up for 16 million dollars. Really?"

A newly-formed coalition called Community Voices To Save Rivington House has also compiled a booklet of quotes from locals and former patients demanding that the healthcare facility be restored, which Huxley says is being sent to the mayor's office this week.

An online petition urging the mayor to intervene and give Rivington back to the community has 1,326 signatures as of this writing. "This neighborhood doesn't need more investments opportunities for the wealthy," it states. "We need affordable, supportive homes for our community's most vulnerable." 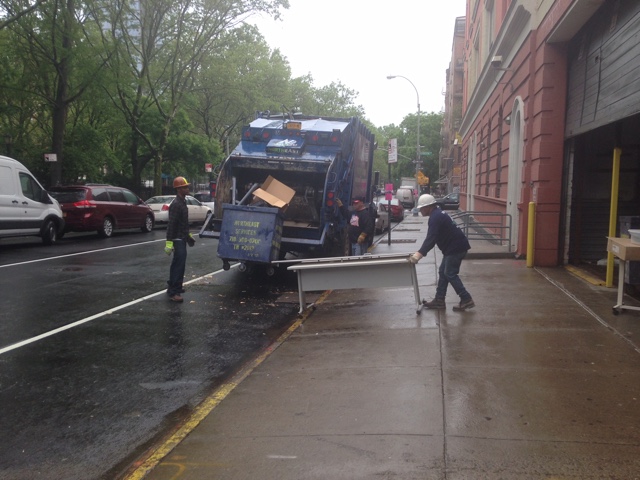 Workers removing furniture from 45 Rivington Street in May (via Tessa Huxley).

Huxley called into Brian Lehrer's weekly #AskTheMayor segment in May, and asked de Blasio directly if he would restore the facility.

"What I want to know is how you and your team can save this beautiful [building], which was converted from a public school with public dollars, and make sure that it can be a neighborhood medical facility, such as a nursing home," she said.

The Mayor proceeded to describe his office's efforts to improve deed restriction protections moving forward, until Lehrer urged him to answer the question at hand. "We are exploring that question right now," de Blasio said. "As soon as I can say more to the community about what can happen on that site, I will."

45 Rivington has been under a stop work order since April 8th. At the time, a Department of Buildings spokesperson said that design plans for the new condos called for major building alterations that the construction permit did not cover.

In May, Huxley and her neighbors documented workers pulling furniture out of the building and crushing it. "Even if we get the building back," Huxley said, "It will be completely empty."

The Mayor's office did not immediately respond to a request for comment.

#45 rivington street
#aids
#Lower East Side
#luxury development
#nursing home
#original
Do you know the scoop? Comment below or Send us a Tip