LES Parks Employee Hospitalized After Being "Overtaken By Fecal Fumes"

A Parks Enforcement Patrol (PEP) officer was "overtaken by fecal fumes" and subsequently hospitalized yesterday after reporting to his shift at Sara D. Roosevelt Park on the Lower East Side. There, he found that the basement to the park's Communication Division building on Broome Street had been flooded with fecal matter—from a clogged toilet in the adjacent public bathroom. 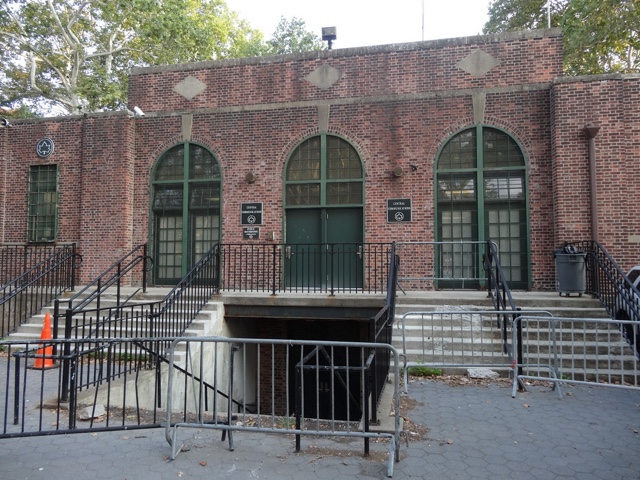 A Walk In the Park reports that the officer, one Daniel Roca, 54, felt "nauseous, dizzy and a tightness in his chest" when he arrived at work around 8:00 a.m. yesterday. So, logically, he put on a mask and went down to the basement to investigate the source of the stench. He and his unnamed coworker, a plumber, reacted with appropriate disbelief:

Roca: "What the hell am I looking at?"

Roca: "That's a fuckin' piece of shit! It's feces. Right there."

Plumber [walking through the basement and pointing]: "All through here, all down here, in the back along here. [Pointing back at the foreground feces] That's just the big logs that couldn't roll. The rest of it is just all around here."

Roca: "You got, like, a copier over there, you've got office supplies..."

"We should not be in that building, period," Roca told the blog after reportedly spending the greater part of yesterday in the ER at NYU Langone Medical Center (but not before allegedly vomiting on the sidewalk). This particular Communication Division building contains offices for about two dozen Parks employees.

"Would Central Communications for the Police Department... be located in a building like that? Of course not."

Other employees said that the toilets in Sara D. Roosevelt are clogged "all the time," and that doors to the bathrooms had been left unlocked for multiple nights leading up to yesterday's incident. According to one maintenance worker, "The junkies stuff rags, shirts and newspapers down the toilet."

The Parks Department confirmed that a toilet in the public bathroom had indeed been clogged with shirts and other "improper materials," and issued the following statement: "NYC Parks has already begun undertaking necessary improvements to the facility, including a thorough cleaning and plumbing repairs."

However, a spokesman stressed that while Roca definitely went to the ER yesterday, it would be presumptive to attribute the illness to those fecal fumes.