Yesterday we expressed some concern over the baby tigers that are currently on display inside of a Lower East Side art gallery as part of an exhibition. The cage they are housed in looks too small, and they are inside of it for at least six hours a day... in the name of "art." These tigers are actually from Ohio, where they will likely return after their job is done here, and The Humane Society of the United States sent us a report last night documenting the farm they are from (see below). As a little background:

In order to protect the citizens of Ohio and promote wildlife conservation and animal welfare, on January 6, 2011, former Governor Ted Strickland signed an Executive Order (EO) restricting the possession and sale of dangerous wild animals, specifically big cats, bears, wolves, nonhuman primates, large constricting and venomous snakes, and crocodilians. The EO established a temporary ban on new exotic pet ownership, directed the Department of Natural Resources (DNR) to adopt regulations for existing owners, and limited new acquisition to qualified entities (such as wildlife sanctuaries, rehabilitators, and facilities accredited by the Association of Zoos and Aquariums). The DNR failed to draft regulations and Ohio’s new governor, John Kasich, chose not to extend the EO, leaving Ohio as one of fewer than 10 states with virtually no regulation of private ownership of dangerous wild animals.

As you may recall, in October of 2011 Terry Thompson of Zanesville, Ohio released dozens of wild and exotic animals from his private menagerie before committing suicide. As for the tigers currently on the Lower East Side (they are scheduled to be there until June 3rd), here is what they are going home to, if they aren't being transported to another job: 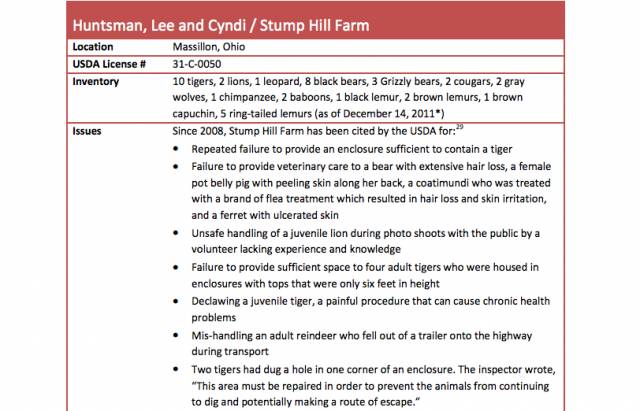 A rep for the Humane Society of the U.S. also sent us this statement about the tigers at the gallery:

The baby tigers on display at the Ramiken Crucible gallery were prematurely removed from their mothers, transported to New York from a game farm in Ohio that has been cited for failing to meet minimum standards of the federal Animal Welfare Act, and are confined to a tiny barren cage inside an art gallery.

Putting tiger cubs on display is a threat to both animal welfare and public safety. There are approximately 7,000 big cats held captive in the United States and most are in unaccredited facilities, roadside attractions and backyard menageries. Those interested in helping big cats in abusive situations should ask the U.S. Department of Agriculture to close a loophole that allows public contact with tiger cubs, and ask Congress to pass H.R. 4122, the Big Cats and Public Safety Protection Act, which would crack down on the use of dangerous big cats in the exotic pet trade.