A coalition of Lower East Side and Chinatown community groups are suing the city to stop a multi-billion dollar mega development of four high-rise towers that some locals fear will greatly exacerbate gentrification.

“It’s the people versus the city of big real estate,” Zishun Ning, an activist at Lower East Side Organized Neighbors, told a crowd of about 70 protesters. Ning’s group was one of several plaintiffs in the case that organized a press conference on Friday morning.

The lawsuit, which is expected to be filed in state Supreme Court Friday, charges the city with illegally approving the plans for the four buildings, one of which will be a 1,008-foot supertall, by failing to follow the neighborhood’s zoning rules. In December, the City Planning Commission voted 10-3 to approve the application for the three projects — consisting of four buildings by three developer teams, which the city said amounted to a “minor modification” of zoning rules.

Led by JDS Development Group, a joint venture of L+M Development Partners and CIM Group, and Starrett Development, the estimated $4.5 billion development in the area known as Two Bridges will have over 2,700 new residential units, of which 25 percent, or 690 units, will be affordable, and 11,000 square feet for retail. Two hundred of the affordable units will be set aside for seniors.

The complaint marks the second legal challenge to the Two Bridges plans. In January, the City Council and Manhattan Borough President Gale Brewer sued the city for allowing the project to proceed without undergoing the city’s Uniform Land Use Review Process, which would require a City Council vote. As an example, both parties have pointed out that JDS’s supertall project at 247 Cherry Street sits on a parcel that had a deed restriction. It states that the property is to be used “in perpetuity” only as housing for low-income elderly and disabled individuals.

But the new lawsuit's plaintiffs, which also include National Mobilization Against Sweatshops, Youth Against Displacement and Chinese Staff and Workers’ Association — are arguing that the permits for the plan should simply be yanked.

Ken Kimmerling, the legal director for the Asian American Legal Defense and Education Fund, which is handling the case, said the plan should have been stopped at the City Planning Commission.

“They should have held hearings about the impact of these buildings,” he said. “If they had been forced to make findings it’d have been clear that these buildings are not consistent with zoning regulations.” 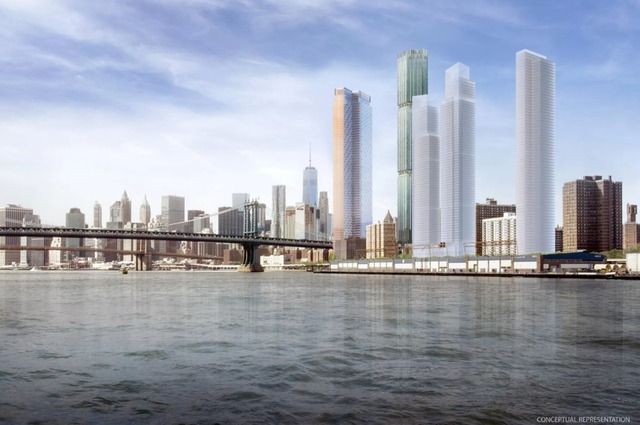 The developers and city planning officials have stressed that the projects include significant private developer contributions, including $12 million in funding to the public housing complex Rutger Houses, an estimated $40 million toward to the East Broadway subway renovation, and an estimated $15 million in upgrades to three local public parks.

“At a time when projects delivering tens of thousands of jobs and hundreds of millions in community investment are being opposed by anti-development sentiment across the city, it’s important to remember what’s at stake here, all proposed after years of community consultation, public review and environmental analysis, and in compliance with zoning that’s been in place for more than 30 years," the development team said in a statement on Friday.

Nicholas Paolucci, a spokesperson for the city’s Law Department, issued the following statement: “The city stands by its review and approvals for this project which is expected to add hundreds of affordable housing units and improve transit infrastructure for the community. We will review the case when we are served.“

At Friday’s press conference, some protesters expressed a broader outrage at Mayor Bill de Blasio, who many accused of failing to deliver on his promise of fighting gentrification. Among the signs was one that read, "Tale of Two Bridges," a reference to the mayor's original campaign platform decrying the city's growing income divide.

Around 70 protesters showed up for a press conference on a lawsuit filed by an LES community group against the Two Bridges project, a 4 tower mostly luxury residential project. “This is happening all over,” said Francisca Benitez. pic.twitter.com/ePZDRaiKsp

Francisca Benitez, an artist who is a member of the Coaltion to Protect Chinatown and the Lower East Side, said the Chinatown community has been fighting for a decade to get the city to address the threat of overdevelopment. Community activists have also expressed concerns about the towering presence of Extell’s One Manhattan Square, a 823-foot luxury condominium that is nearing completion along the Lower East Side waterfront.

“There’s proof that people have been asking the city government to address this. And what do we see? Nothing,” she said. “What kind of city they want to make? This city for oligarchs with glass towers?”

UPDATE: A clarification was made to describe the Two Bridges mega development as three separate projects, consisting of four buildings, by three developer teams.

#Chinatown
#lawsuit
#Lower East Side
#real estate
#Two Bridges
#original
Do you know the scoop? Comment below or Send us a Tip