Lehman Employees Think About Next Chapter 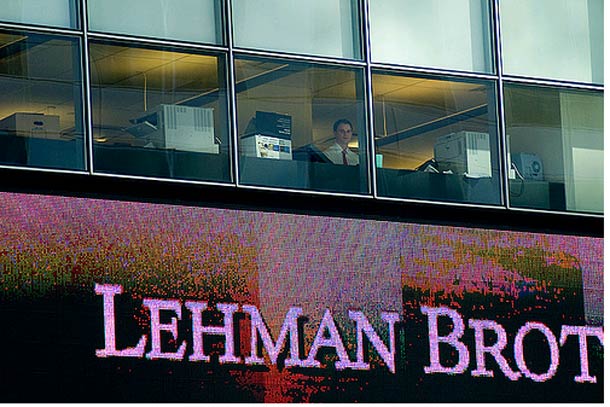 The fallout from Lehman Brothers' self-destruction meant employees spent the weekend and yesterday packing up their things and working on their resumes. The NY Times reported that the trading floor was a third empty and the "bankers’ dress code was mostly out: while a few holdouts kept their ties knotted firmly, most of the traders moved around in jeans, casual shirts, even sneakers. One young employee showed up in a green Lehman T-shirt."

Now employees will be competing with each other for new jobs. One employee said, "It's going to be rough. You've got 10,000 employees here at the headquarters laid off. You're going to be competing amongst your co-workers for a job. That's going to be real hard." But there's always eBay: One employee put Lehman items on sale, writing, "The only importantish docs I have now are my Lehman stock certificates, which I plan on using to warm my apartment this winter when I can't afford the heating bill."

And one shareholder, David Shorr, now a wealth adviser at Morgan Stanley but a former Lehman employees, told the Post how he had 1 million shares of Lehman Brothers, which means he lost $6 million, "I'm wiped out." Shorr raged at Lehman CEO Richard Fuld, as did other employees, since Fuld apparently had a chance to sell the company in August.

There's little love for Treasury Secretary Henry Paulson too--Dealbreaker reports that there's a shrine for Paulson and Fuld on one floor: "It consists of pictures of Hank Paulson and Dick Fuld, both pierced by push pins. Hank has had his eyes gouged out, and his brain run through. Dick has one eye gouged and a pin through his heart."

#employees
#laid off
#lay offs
#lehman brothers
Do you know the scoop? Comment below or Send us a Tip