Lehman CEO Fuld Blames Everyone But Not Himself 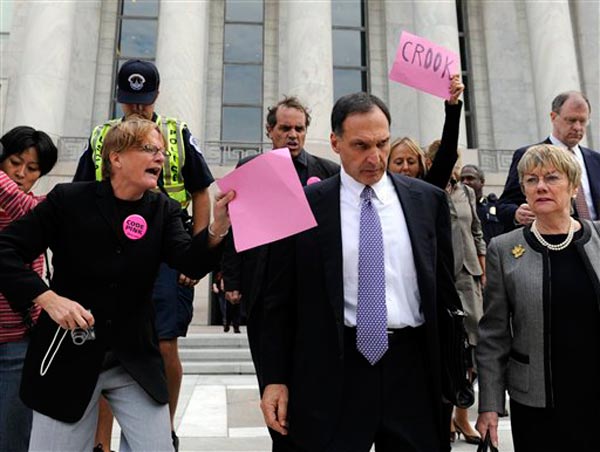 Richard "Dick" Fuld, the CEO who led the once-storied Lehman Brothers into bankruptcy, was defensive when questioned by the House Oversight Committee yesterday. The NY Times reports he "blamed the news media. He blamed the short-sellers. He blamed the government, as well as what he characterized as an 'extraordinary run on the bank.'" but "never really blamed himself." Fuld did take responsibility for the collapse, and said he'd wonder for the rest of his life how he could have done something differently.

Regarding fat cat pay, when Chair Henry Waxman asked him, "You've been able to pocket close to half a billion dollars [since 2000] and my question to you is that fair for a CEO of a company that's now bankrupt? It's just unimaginable to so many people," Fuld said, "I think for the years you're talking about here I believe my cash compensation was close to 60 million and the amount I took out of the company over and above that was closer to 250 million. Still a large number though." 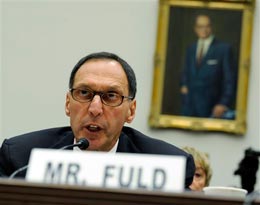 Though he admitted he was caught off guard by the crisis (for instance, he thought the mortgage crisis just affected residential mortgages--not commercial ones as well), the Financial Times noted an April e-mail Fuld sent his chief legal officer about a meeting with Treasury Secretary Pualson: "Mr Paulson, the former chief executive of Goldman Sachs, had a 'worried view' about Merrill Lynch but that Lehman had a 'huge brand' with the US Treasury." And Fuld also wondered why Lehman wasn't bailed out, when other firms were.

Additionally, journalist Vicky Ward confirmed that Fuld had been punched in the face last month, citing two sources (see video of Ward on CNBC). On September 22, Dealbreaker had posted some rumors about Fuld being hurt in some way (run over by a cab, panic attack)--"Dick Fuld had audacity to use the Lehman gym [on Sunday] and got punched in the face."

Today, AIG executives will speak to the committee.

#bankruptcy
#House Oversight Committee
#lehman brothers
#Richard Fuld
Do you know the scoop? Comment below or Send us a Tip