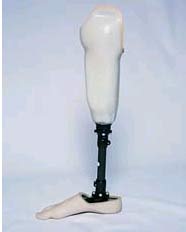 Authorities claim that a 22-year-old Jamaican man used his prosthetic legs to smuggle a kilo of cocaine into the country. The Daily News reports that wheelchair-bound Dean Stewart was, who wears two prosthetic legs, stopped at JFK Airport for a routine search when the drugs were discovered.

Stewart aroused suspicion in a number of ways. He had claimed he couldn't remove the legs, and the feds noticed his ticket "had been purchased in cash three days earlier" and as well as other brief visits to the U.S. Other tip-offs: The "cousin" Stewart was supposedly visiting didn't check out and Stewart's statement that his rehab center bought his plane ticket was found to be false after the travel agency said Stewart bought the ticket himself. Then "Stewart's prosthetic legs were removed and X-rayed at Kennedy's medical facility," where cocaine was found in the limbs.

Stewart has been held without bail since the November 30 arrest. A few months ago, a man was accused of smuggling rare iguanas - via his prosthetic leg - into the United State from Fiji.