A group of legal experts are filing complaints today with the NYPD, the U.S. Department of Justice, and the United Nations, demanding that the NYPD change the way it polices Occupy Wall Street protests and prosecute officers who brutalize protesters. The complaints are accompanied by a whopping 132-page report [pdf] chronicling the history of Occupy Wall Street and the numerous allegations of NYPD abuse of demonstrators' rights.

The thorough and annotated report, called Suppressing Protest: Human Rights Violations in the U.S. Response to Occupy Wall Street, was authored by the Global Justice Clinic (NYU School of Law) and the Walter Leitner International Human Rights Clinic (Fordham Law School). It catalogs "130 specific alleged incidents of excessive police force, and hundreds of additional violations, including unjustified arrests, abuse of journalists, unlawful closure of sidewalks and parks to protesters, and pervasive surveillance of peaceful activists." (Our OWS coverage is cited several times in the report, including this February incident in which police randomly arrested protesters at Zuccotti Park without provocation.)

"Recently, officers repeatedly yanked the broken collarbone of a protester as he begged them to stop hurting him," said Professor Sarah Knuckey, one of the report’s principal authors, who also witnessed these incidents. "And just two weeks ago, a phalanx of officers removed a grandmother from a park for the ‘crime’ of knitting in a folding chair, arrested a man trying to help her leave, and then arrested another man filming the incident. These are just two of hundreds of examples we document in our report, demonstrating a pattern of abusive and unaccountable protest policing by the NYPD."

The legal complaints filed today include the following demands:

Yeah, we're sure the NYPD will get right on that! And if not, we're sure we can count on the United Nations Security Council to take swift and decisive action. The authors note that to this date, only one police officer is known to have been disciplined for misconduct in the context of Occupy Wall Street policing. The lawsuit is just the latest Occupy-related legal action—last month, a federal judge allowed a class-action lawsuit against the NYPD to proceed. And four City Councilmembers have filed a federal civil rights lawsuit accusing the NYPD of routinely violating First Amendment rights and using excessive force to suppress dissent.

Among the alleged incidents of police brutality cited in today's report: "A journalist reported that an officer grabbed a protester 'by the bottom of her throat and shoved her head against the hood of a car,' and that another officer then 'forcefully pressed her head against the car.'" And on October 15th, "a journalist stated that when he asked a non-uniformed officer for his name at a march, the officer pushed the journalist against a wall and held him there, threatening him that if he kept asking questions, he would get 'his fucking ass beat.' " NYPD spokesman Paul Browne did not respond to a request for comment. 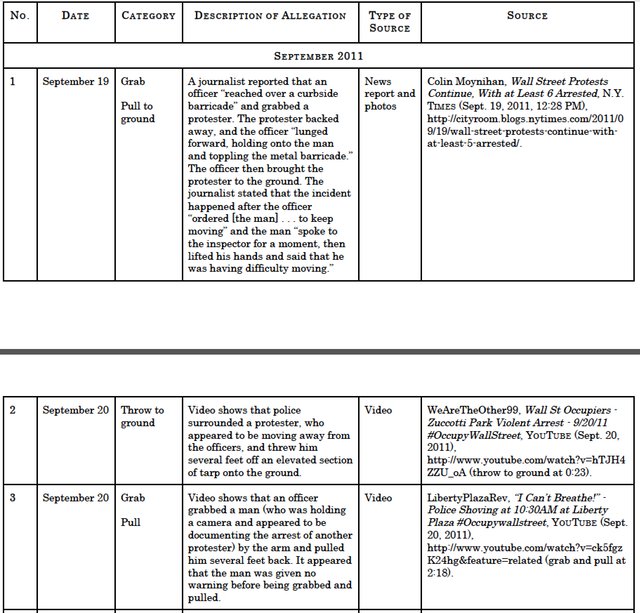 (Three of 130 incidents of alleged police brutality against OWS protesters cited in the report [pdf].)

#nypd
#occupy wall street
#police brutality
#original
Do you know the scoop? Comment below or Send us a Tip