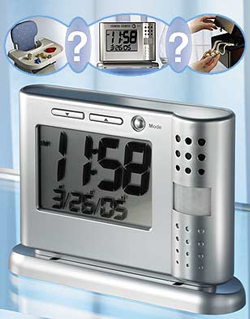 A Legal Aid Society lawyer was arrested yesterday for allegedly planting a clock with a hidden surveillance camera inside it in a female co-worker's office. WNBC reports that 32-year-old Peter Barta's distaff co-workers told police detectives that they regularly used their offices to change into work clothes (like a suit for court) or for after-work activities. Barta had videotape in his home of one of his workers with her breasts and buttocks bared.

In October 2006, one of the five women who had been recorded noticed a motion-activated hidden camera inside the alarm clock in her Manhattan office. When she removed the digital memory card from the camera and viewed what had been captured, she contacted her supervisors. Detectives have tape of Barta actually removing the camera from the alarm clock. When the district attorney's office was notified of the creepy criminal behavior, Barta resigned within the week. Nine months later, he is being charged with unlawful and attempted unlawful surveillance and could face four years in prison. Any lawyer convicted of a felony in New York State is automatically disbarred.

The motion-activated surveillance camera hidden in an alarm clock was identified as from The Sharper Image, and is likely the one we have pictured above. "Motion-activated camcorder lets you see 'What Really Happened While You Were Away!™'" sounds a lot creepier in the context of recording one's co-workers changing without their knowledge.

Update: The NY Times reports that Barta attended Stuyvesant High School, where he was a "star debater," and Georgetown Law. And the judge, Laura A. Ward, who set his bail said, "Mr. Barta, you’ve been in front of me when I was in Criminal Court," and offered him to ask for a different judge. The Daily News says that Barta, who released without bail, waived his right to a grand jury, which means evidence won't be replayed and victims won't have to testify: "In a display of chutzpah, his lawyer, Henry Putzel, called it 'a gesture of respect to all his former colleagues' and suggested he was seeking a plea deal."