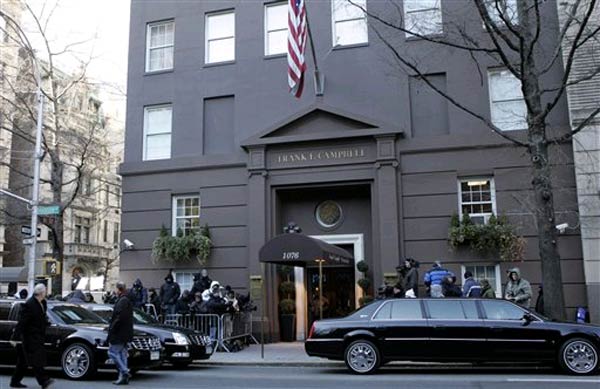 Photograph of the crowd outside the Frank E. Campbell Funeral Home by David Karp/AP

Yesterday, over a hundred people - made up of "fans, reporters and photographers" - waited outside the Frank E. Campbell funeral home, where the body of actor Heath Ledger had been kept since ME's autopsy. Ledger had been found dead in a SoHo apartment by his masseuse and housekeeper on Tuesday afternoon. The cause of death is inconclusive, but he had a number of prescription drugs in the apartment, many of them to aid sleeping (he had been described as looking tired recently and even told interviewers he had trouble sleeping after filming The Dark Knight). 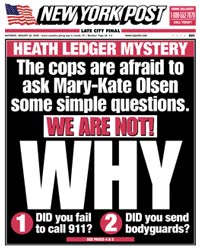 Around 4PM, undertakers removed a plain wooden box into a hearse (video at TMZ). Ledger's body was being flown back for a burial in Perth, Australia, and no family members appeared to be present at the funeral home. And though there was some talk of a service in Los Angeles, Ledger's publicist said, “There are no plans for a public service.”

The NY Post proclaimed on its Friday cover that Mary-Kate Olsen, who the masseuse called four times times after finding Ledger's body (three times before 911), would be questioned by the police. However, the police denied that, saying Ledger was probably dead for two hours before he was found. Today, the Post notes that the NYPD did not ask for a correction and offered a statement from editor-in-chief Col Allan mentioning that the actress' lawyers had been "threatening" the paper via email and suggested the cops caved to MKO's legal team: "The New York Post will not be pressured, and we find it odd that the chiefs at the NYPD appear to be terrified of 4-foot-11 inch, 90-pound Mary Kate Olsen." And the Post also wonders what Olsen knows in an editorial.