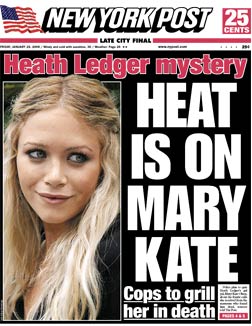 Okay people, time for your morning update on The Ledge – come on, you know you want it. Even Daniel Day Lewis says there’s nothing else to talk about. (Scroll down.)

Sorry we’re late, but there are a lot of new developments this morning. First and foremost, Heath Ledger is, sadly, still dead. Second! Before calling 911, Diana Wolozin, the unlicensed massage therapist who found Ledger’s body, used Ledger’s phone to speed dial Mary-Kate Olsen for advice not once, not twice – like we thought yesterday – but THRICE before deciding to call that emergency hotline thingy… what’s the number for 911? Total time spent in counsel with Olsen before calling 911: 9 minutes.

Would paramedics have been able to bring Ledger out of cardiac arrest had it not taken Wolozin almost 45 minutes to summon them after she entered the apartment? Does Wolozin now have massage oil and blood on her hands? As one commenter pointed out yesterday, licensed massage therapists are required to show proof they have first aid and CPR training. And practicing massage without a license is a Class E felony punishable by a maximum of four years in prison.

The ending is anything but happy, and police are expected to talk soon with Olsen to get, like, her side of the story – which includes this plot twist, as told to People Magazine by an unnamed source: “Mary-Kate and Heath were casually dating for three months before Heath's death. They were hooking up, but neither were particularly interested in making it exclusive…They had a bond that was based on partying, and they had the same tastes in partying.” Rest in peace, Heath, but the party must go on – last night Olsen was spotted “smooching with a man on the dance floor” at the downtown nightspot Sweet Paradise.

Know what else is depressing? Daniel Day-Lewis breaking down on Oprah. Fighting back tears, Day-Lewis said, “It seems somehow strange to be talking about anything else… I didn’t know him but I’d already marveled at some of his work and I looked forward so much to see the work he was going to do in the future.”

Ledger’s next project, the Terry Gilliam-directed fantasy film The Imaginarium of Doctor Parnassus is now on the rocks. The $30 million production, which also stars Christopher Plummer and Tom Waits, started filming last month, but it’s now been put on hold indefinitely. According to one insider, the project is now listed as “subject to a force majeure, invoking a contract clause that releases all parties from liability in exceptional circumstances like the sudden death of a leading cast member.” Thankfully Ledger’s work as Joker in The Dark Knight is all in the can.

Other news surrounding the death of The Ledge: There will be a private viewing of the body today for close family, friends and the international media circus at Frank E. Campbell Funeral Home on Madison Avenue and 81st Street. His family, who wrote some heartbreaking tributes for an Australian paper, will bury Ledger at a private service in Perth, where, somehow, the homophobic hillbillies at the Westboro Baptist Church have vowed to stage a protest because of Ledger’s role in Brokeback Mountain. And who can blame them? Ledger probably died naked and face down just to piss them off.

Update: The police say the NY Post's report that they want to question Mary-Kate Olsen is incorrect, which the Daily News is thrilled to point out. And Olsen released a statement about Ledger's death, "Heath was a friend. His death is a tragic loss. My thoughts are with his family during this very difficult time."