On Thursday morning, Ravi Ragbir will arrive at Federal Plaza in lower Manhattan for his annual check-in with Immigration and Customs Enforcement. After passing through airport-style security, Ragbir, who was born in Trinidad, will head to a familiar room on the 9th floor, undecorated but for a small television typically tuned to Fox News. Here, an ICE deportation officer will decide if Ragbir can remain in the country he's called home for 26 years.

"I'm preparing for the worst," says Ragbir, who has faced the looming threat of deportation since his conviction for wire fraud in 2001. "I'm not planning any appointments after March 9th. I've cleaned out my apartment."

It's the Friday before the check-in and Ragbir and I are riding an express train to his office at Judson Memorial Church, where he serves as executive director of the New Sanctuary Coalition, an interfaith network of congregations and activists working to protect New York's immigrant families from detention and deportation. Ragbir started as a full-time organizer for the coalition in 2010, and has since become one of the city's most visible immigrant rights activists.

"Ravi is the most connected leader around," Donna Sprecher, minister at Judson and a founder of the coalition, told Gothamist. "He knows by name more undocumented people than just about anybody in the five boroughs."

At Times Square, Ragbir's phone lights up with news of a reported ICE raid in Queens. He fires off a few texts, then looks up from his phone. "What do you do in the last weekend?" he asks.

Ragbir says that he has promised his wife they'd do something special on what might be their last weekend together in the city. People have suggested Coney Island, but it's bitterly cold outside. They've never been to the top of the Empire State Building, but like most New Yorkers, they have no real interest in doing so.

"That's the easiest question, you would think, to answer, but it might be the most difficult," Ragbir says. "I can think about immigration and legal [matters] and all of this stuff and come up with some solution or strategy. But this, I don't know." 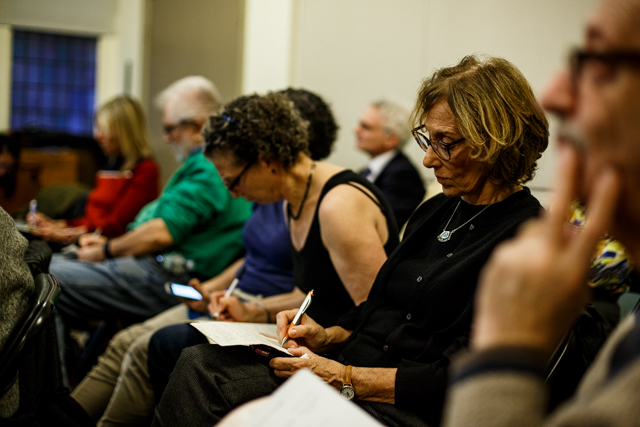 Volunteers attend an accompaniment training at the B'nai Jeshurun synagogue on the Upper West Side. (Scott Heins/Gothamist)

Earlier that morning, Ragbir was on the Upper West Side, addressing some 50 congregants of the B'nai Jeshurun synagogue. They were gathered to receive training in the coalition's Accompaniment Program, through which volunteers provide support to immigrants facing imminent deportation. At least once a day, Ragbir will lead a new group of volunteers through training, explaining the ways in which their presence at a check-in is helpful, and what to do in the event a client is detained.

"Our volunteer base has exploded," Ragbir told the group. "People are coming to us because we actually have something they can do that can make a difference immediately."

In addition to accompaniment trainings, Ragbir runs a weekly immigration clinic and occasional sanctuary town halls. Over the past few months, I've observed Ragbir lead half a dozen of these meetings in rec rooms and religious institutions throughout the city.

When he presents at these meetings, Ragbir describes the existential threat posed by the Trump administration, but places this moment in broader context, reminding his audiences that President Obama presided over an unprecedented number of deportations. "In one year, Obama deported as many people as there are in Staten Island," he says. ("Though maybe we want Staten Island to disappear," he jokes, apologizing.) He never mentions Trump by name, instead referring to him as "this guy."

Ragbir explains that the philosophy of the New Sanctuary Coalition is that no person should be deported, regardless of her past. It's for this reason that he speaks openly about his own criminal record. "A lot of the people we work with have criminal convictions," he says. "The first rule is no judgment."

Juan Carlos Ruiz, a Lutheran minister at St. Peter's Church and co-founder of the New Sanctuary Coalition, sees Ragbir as a protagonist in the struggle to counter the narrative that an immigrant who makes a mistake should lose her right to remain in the U.S. "Ravi is the face of the movement," he says.

Ragbir's story, according to many of his colleagues, demonstrates the worst flaws of our legal system, and the precarious existence of the immigrants caught in its crosshairs. And as flawed as this system is now, under the Trump administration, things will only get worse. 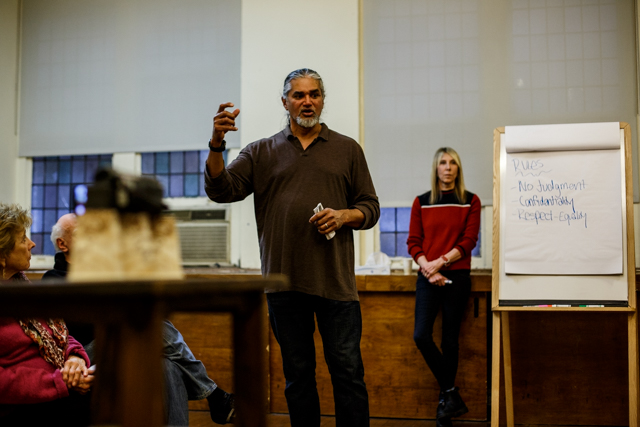 Ragbir immigrated to the United States from Trinidad in 1991. In his mid-twenties at the time (Ragbir won't disclose his age), he moved to Crown Heights and quickly fell in love with a U.S. citizen. They married soon after, and had a daughter together in 1994. During her early childhood, Ragbir worked odd jobs as a window cleaner and street vendor, while earning his degree in financial management.

In 2001, while working as a loan processor at a now-defunct mortgage lender, Ragbir was convicted of conspiracy to commit wire fraud. While the higher-ups who actually reviewed the fraudulent loan accepted plea bargains, Ragbir took his case to court, where he was ultimately found guilty. He spent three years on house arrest, and an additional 30 months in federal prison. To this day, Ragbir maintains that he was just a low-level employee following the bank's own rules—the same rules, he notes, that "caused the collapse of the economy."

Following his release from prison in 2006, an immigration judge ordered Ragbir deported without a hearing, a decision that Ragbir appealed. While his appeal was being considered, he was placed in mandatory indefinite detention in Bergen County, New Jersey. His family was free to visit, but they had to speak to him from behind a thick glass wall. "I knew my daughter couldn't take it, so I told her not come," he recalls. After a few months, he was moved to a private prison in Perry County, Alabama, 1,000 miles from his wife and daughter.

There, he lived in constant terror that a final removal order would come through. "You expect them to come knocking on your door at a certain time, and once that time has passed, only then you can breath," Ragbir says. "But then it starts all over again."

Throughout the country, 40,000 immigrants sit indefinitely in detention as they await deportation proceedings. (This is what happened to Ragbir.) These individuals have not been charged with a crime, and many advocates argue that this detention therefore violates their right to due process. Last week, MSNBC reported that the Trump administration is planning to increase by 500 percent the number of beds available for the detention of asylum-seekers.

After two years, Ragbir was released from detention, thanks to a legal team committed to taking the order through the appeals process. As the case made its way to the U.S. Supreme Court (which ultimately declined to hear it), Ragbir was forced to observe a curfew, wear an electronic ankle monitor, and attend mandated ICE check-ins three times a week.

Ragbir attempted to return his normal life, but the threat of expulsion hung over him constantly. At one ICE check-in, he says, an officer accused him of abusing the system by seeking due process. He said nothing, but thought of his fellow immigrants still in detention—some denied necessary medicines, others locked in solitary confinement. It was around this time that Ragbir began working with the New Sanctuary Coalition.

Ragbir finally caught a break in 2011, thanks to a legal policy known as prosecutorial discretion. Clarified through two Obama-era memos, the policy allowed ICE deportation officers to differentiate between violent criminals and low-level offenders, and to toss out certain cases, like those involving an immigrant with a "very long-term presence" in the country or children who are U.S. citizens. As a result of PD, Ragbir was granted a one-year stay of removal, which he's been able to extend on a bi-annual basis through 2018.

Under the Trump administration, the policy that permitted Ragbir to remain in the U.S. may soon be abandoned. In an interview with Gothamist last month, an ICE spokesperson denied that prosecutorial discretion has been suspended, but several defense attorneys said that all applications for PD appear to be on hold. 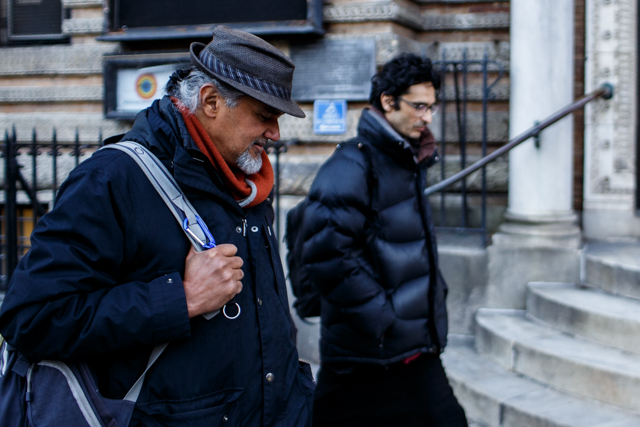 "There's been a clear and distinct shift," Michael Musa-Obregon, managing attorney for the New York-based immigration firm MusaObregon and Associates, told Gothamist at the time. "Before January 20th we would go into court and there were legal accommodations being made under PD. After January 20th, applications are not being accepted."

That shift in the legal framework, combined with nationwide reports of aggressive ICE actions toward immigrants once considered low-priority, has kept Ragbir very busy over the past few months. He spends his hours organizing, splitting time between recruiting new activists and advising fellow immigrants on their options.

When I reached Ragbir by phone Monday, he was rushing uptown, headed to a town hall at Rutgers Presbyterian Church to answer questions about the role that churches can play in offering sanctuary to immigrants.

I asked him what him and his wife had ended up doing over the weekend.

"We caught up on rest for most of Saturday, then went to a favorite restaurant and had a few drinks," Ragbir said. After church on Sunday, they took a stroll through their Brooklyn Heights neighborhood, and later got massages. Then they went home, threw on a Carlos Santana record, and danced. "We didn't think about it at all," he said.

#deportation
#ICE
#immigration
#new sanctuary coalition
#ravi ragbir
#longform
#original
Do you know the scoop? Comment below or Send us a Tip
A new Gothamist is coming! We’ve moved comments over to our beta site. Click here to join the conversation and get a preview of our new website.